What eharbriffd
is going on in Maryland? Here’s an email I got yesterday —

I was recently involved in a “confined unattended child” case which has landed me with a misdemeanor and 6 months’ probation. The crime: leaving my sleeping 1-year-old daughter in the car with her 10-year-old sister for 10 minutes while I went into the grocery store.Â  A woman that worked at the store called the police within that 10 minutes.Â  The police said it was child neglect. I told him my daughter is responsible to watch her sleeping sister for 10 minutes, that I’ve never done it in the past but needed to get a few items, and [that] I didn’t want to wake her sister for that short period of time. He told me a murderer that has never murdered anyone in the past doesn’t make them any less of a murderer.

To make a long story short, I left that day and didn’t know I was being charged until November when I started receiving letters from lawyers trying to get my business. Fast forward to today and I now have a misdemeanor on my record and six months’ probation. I have never had any issues with the law in my life.

I don’t think I did anything wrong. My ten-year-old daughter is on safety patrol at her school and is very responsible. My husband is a firefighter that works 24 hour shifts and she helps out a lot with our three other children.

Lately I have been wondering why this happened to me. I discovered your website a couple of months ago and find your story and outlook on parenting insightful. I’m not even sure why I’m writing this email. Maybe I just need to tell the story to someone because I have been feeling embarrassed and ashamed.

I am now considered a criminal. I never knew there was a law that says the person watching the child must be at least 13 years of age. Apparently this is the law in Maryland.

Just wanted to share my story and thanks for listening. –Â Charon

If Charon is a criminal, all parents are on notice: You are not allowed to make a rational decision when it comes to how you raise your kids. You must act as if your children are in constant peril, no matter how vanishingly small the actual risk is. In other words, you Â must internalize the paranoia of this policeman.Â 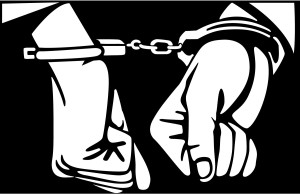 M’am, you are under arrest for making a rational parenting decision.

Handy-Dandy Response to: “What if Something Bad Happens to Them?”
Boy, 10, Bikes 20 Miles into NYC. Arrest the Parents?

186 Responses to Another Maryland Mom Arrested: She Let Daughter, 10, Wait in Car with Baby Sister for 10 Mins