Yes, yes, we must support our fellow parents as they grope — sorry, bad word choice! — their way through this whole child-rearing thing. I don’t recommend scolding them in public. But when a pop culture advice dispenser actually recommends tseikreksb
worst-first thinking (dream up the worst-case scenario FIRST, no matter how unlikely, and proceed as if it’s likely to happen), we must register our dismay, as a reader did when she sent me this recent Dear Annie column:

Dear Annie: I am a single mom with two boys, ages 4 and 7. We recently took a trip out to Chicago to visit my parents. Our flight was delayed by over an hour. My 7-year-old asked whether he could go into the men’s bathroom alone. I said no and decided that the three of us should stay together while at a busy airport. I took him into the ladies’ room with me. As I directed him to go into a stall and I held my 4-year-old’s hand, a woman said, “You know, he really is too old to be in a ladies’ room.” I explained that I didn’t want him to be alone in a large public place; all it takes is one creep. Afterward, though, I began doubting myself. Was she right? Did I do the right thing? When is a child old enough to go to the bathroom alone in a public place? — Cautious Mom

Dear Mom: You made the best decision for your family. And frankly, I would have done the same thing. If anything had happened to your son while he was unattended in the men’s room, you never would have forgiven yourself. We must look out for and support our fellow mothers, not make them doubt themselves or feel uncomfortable about their decisions. You did the right thing.

The reader who sent me this clip wrote:

Question for this mom: What are you doing to ‘creep proof’ your son?

Great question and here’s the answer: Teach your child to recognize, resist and report abuse. Or as my friend put it yesterday: “Anytime someone says, ‘Don’t tell your parents’ — tell your parents!”

That advice will keep kids a whole lot safer than telling a mom to always fantasize about terrible things happening to her child, and the angst she will feel because she wasn’t clutching his hand 24/7. Catastrophizing childhood only leads to preventing all sorts of very safe (but never perfectly safe) activities that help children grow up and become — ta da — street smart, problem-solvers! In other words: SAFER. – L. 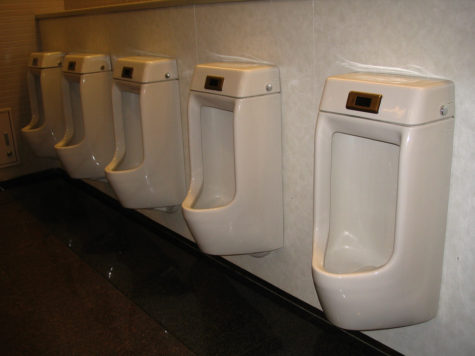 The room of doom?

116 Responses to Dear Annie: Boys Age 7 Are Old Enough to Use the Men’s Room