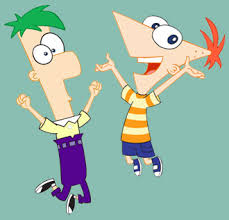 Readers — This look at cartoon culture comes to us from Dressler Parsons, a content writer at the Arizona-based SAT prep outfit,  Student-Tutor. I haven’t seen this cartoon but it does sound great! – L

Phineas & Ferb & Fighting the Urge to Helicopter, by Dressler Parsons

It seems like the cartoons and kids’ shows that seep into society shoot down Free-Range Parenting.  I mean, stereotypically, unsupervised  kids run wild and wreak havoc. As far parents, if they’re even introduced, they’re usually bumbling, incompetent dodos.

But a show has popped up that challenges the status quo–“Phineas and Ferb,” a Disney Channel cartoon.

Quick and clever, this show could start to change the way we think about the “dangers” of letting kids loose and the equally misguided belief that Free-Range Parenting is the same as neglect.

Okay, okay.  Advice from a cartoon?  Aren’t these the same shows where people/animals/sponges frequently (read: always) survive explosions or falls from skyscrapers?

Hush.  Phineas and  Ferb are worth a look because they celebrate innovation, imagination and independence. How?

1) For once, the parents aren’t stupid or neglectful.

The show covers Phineas and Ferb’s (ridiculously long!) 104-day summer vacation, wherein their parents frequently leave them to their own devices—the “have fun, be safe” implied. And here’s a novelty—they’re smart, level-headed, and have first names.

Lawrence (the dad) leaves daily for his antique-dealing job, and Linda (the mom) often expands her world via cooking classes, or playing keyboard with her free-form jazz band.

Whenever the parents return, Linda makes snacks for the boys and their friends. Which, okay, is a little 1950’s-esque, but that’s for another conversation.  The point is that even though she’s Free-Range, she cares. It’s not either/or!

2) Other adults in the show treat Phineas and Ferb like capable human beings.

Here’s the format:  Phineas and Ferb wake up.  Something inspires them.  Phineas turns to the oft-mute Ferb.  He says, “Ferb, I know what we’re gonna do today.”

Cue the building of crazy contraptions—or accomplishing seemingly impossible feats, like brilliantly marketing a new toy that does “nothing” (and encourages creativity).

And they invariably come in contact with adults who say things like, “Aren’t you a little young to be building the world’s largest funhouse?”

That’s that.  They’re left to do their thing, and they succeed wildly.  (“That’s because it’s a cartoon!”  Shh.)

3) In fact, the only person who’s unnerved by their freedom is their high-strung older sister Candace.

And the show rails against her reaction.

In the episode “Phineas and Ferb Get Busted!”, Candace intercepts her mom at the store and drags her to a Phineas-and-Ferb-built rollercoaster.  Linda flips out.

In a fit of worry, she ships the boys to a boot camp that aims to destroy their “unacceptable levels of creativity, imagination, and unbridled enthusiasm.”  They’re brainwashed into safety-centered robots. They won’t even break out of the boot camp when Candace comes to rescue them, because it’s “against the rules.”

Of course, it turns out to be Candace’s bad dream, and she wakes up to the error of her overprotective ways.

30 Responses to Free-Range Phineas and Ferb