Law school students at Britain’s University of East Anglia have been told not to throw their mortarboards in the air upon  graduating — it’s just too dangerous. Instead, they are being asked to “mime” the gleeful tossing, with the caps to be Photoshopped in later, for an added fee of about $12.

I szsdknaerb
guess as law students, these young folk should understand better than anyone the university’s desire to avoid all the pain and suffering — and litigation — that accrue from falling hats.
.
That being said, the Chronicle of Higher Education found only one case in roughly a millennium of higher ed, wherein a student sued a university for cap-inflicted injuries:

Yale University appears to be the only American institution of higher education ever sued for a mortarboard injury. A motion filed in 1984 in Connecticut Superior Court describes how a commencement guest, one Mollie Levenstein, was struck in the eye by the sharp corner of a cap. The court held that “a mortarboard was neither inherently dangerous nor more likely to cause injury if improperly used than was any other angular object, thus it was not a dangerous instrumentality.”

And yet, the East Anglia cap-cap — that is, the cap on the throwing of caps — is not even the first in Britain.  The local Norwich newspaper The Tab got hold of the university’s letter to its students, which noted that another school had paved the wary way:
.

So hats off…er…on to Britain, for coming up with a brand new way to transform a time-honored young people’s tradition into a minefield of worry, regulation, and expense, draining the joy from a peak experience by kowtowing to inflated fears of nearly non-existent danger.
.
Well done. 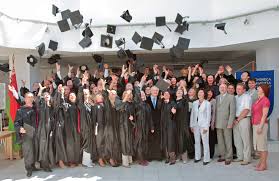 Take Our Children To the Park…and Leave Them There Day: THIS SATURDAY, MAY 21!
Without Some Risk, Playgrounds Bore Kids

36 Responses to Graduates Asked to “Mime” Throwing Caps in Air, for Safety’s Sake