May 6, 2013
Hi aizeyehnbb
Folks! This lovely and simple idea comes to us from Heike Larson, who is the Vice President of Parent Outreach at LePort Schools, a group of six private Montessori schools in Orange County, CA. She writes about education in general and Montessori in particular on the LePort Schools blog. – L.
.
IF SUMMER IS FOR PLAYING, HOW CAN WE MAKE THAT HAPPEN?
This summer, instead of just enrolling my 6-year-old in camp, I decided to find a way to get her some real Free-Range experiences. I’ve organized for a group of about ten 5- to 7-year-old girls from my daughter’s school to have two weeks of “free play camp” in local parks. Here’s how it will work:
.
Each day, we’ll pick a different park, preferably one that is BIG. The parents will drop their daughters off at the park in the morning, and pick them up late in the afternoon. One parent will stay to provide minimal supervision (basically, to make sure no child leaves the park, and to serve as a safety net in case there is an injury or allergic reaction the kids can’t handle themselves). Mostly, she stays in the background. The goal is to leave the girls to themselves, to just play, like we used to do.
.
Since where we live, it’s not practical for the girls to just roam around the neighborhood at age 5 or 6, this is the next best thing. And the parks we’re choosing have  forests, big concrete slides, climbing walls, bike paths, creeks, even a lake. We’ll bring some gear — balls, picnic blankets, bikes, Frisbees, and lots of extra clothes — and then, of course, there are all the cool things that nature provides!
.
I’m very excited to see what the girls come up with: what games they’ll invent, how they’ll solve the problems and conflicts–and how they’ll enjoy this new experience. I thought I’d share this idea with Free-Range Kids, which is part of the inspiration of making this camp happen, because maybe it will catch on. I’ve been very encouraged by how excited the parents I approached have been about this idea. And it’s a great way to have a free summer camp, as each parent only has to supervise 1-2 days during the two weeks!  Wouldn’t it be cool if parents all over the country started offering their elementary age children a similar Free-Range camp experience? Maybe it can really happen!.
.
Cheers, Heike 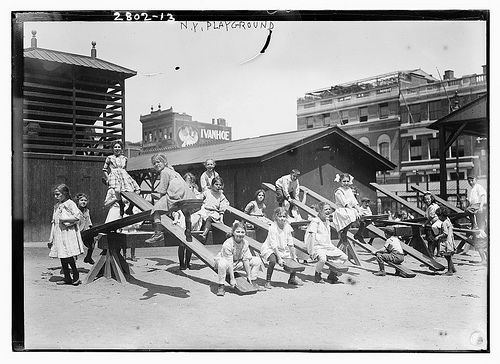 Come out and play — all day!

free play, get kids outside

48 Responses to How to Give Your Kids an Old-Fashioned Summer!