Last week a spokesman for the National zrrhsnfbis
Center for Missing and Exploited Children went on Good Morning America and told us to stop teaching our kids “Stranger Danger,” despite having rammed that fear down our throats for over a generation — a point I discussed in this post.

To demonstrate how important it is that children learn to approach a stranger for help, in case they ever need it, Good Morning America and the spokesman, Callahan Walsh (John Walsh’s son) staged a bizarre little experiment. They dressed a school stage like an abstract minimalist grocery store and then asked a gaggle of children who they’d ask for help if they were shopping with their mom and suddenly couldn’t find her. Would they ask:

a) A mom with a baby?
b) A security guard with a badge?
c) The checkout lady, also with a badge? Or —
d) A guy.
.
Of course the children were encouraged to talk to everyone EXCEPT the guy…I guess on the very likely chance that any man in a grocery store will stop shopping for Doritos and steal a lost child, given half a chance. The instructions boiled down to this:

The guard, mother and clerk all had identifiable markers that signify a safe adult — including a badge, a baby and a name tag, according to Walsh. In a dire situation, a child should feel empowered to reach out to any of these strangers who possess the markers that signify they can be trusted for help.

Somehow wearing a badge or being female makes people good. But a man, even one just minding his own business, is  simply not to be trusted, even if the kid is in a “dire” situation. So maybe the new slogan should be:  “See a guy/Run and cry.” Or, “If he’s got balls/Jump the walls!” Or, “He’s got a penis?/Those are the meanest!” Feel free to supply your own mnemonic device.
.
And so the senseless fear-mongering continues…now in the guise of reassuring a successfully terrified America. – L
. 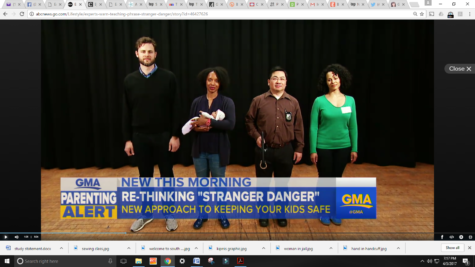 One of these things is not like the other. While ostensibly rejecting “Stranger Danger,” The National Center for Missing & Exploited Children still insists one of these people cannot be trusted. Hint: He’s got a Y chromosome and no badge.

$1000 Fine or YEAR in Jail For Letting Kid Wait in Car 6 Minutes? Rhode Island, Defeat This Law!
Teen Invites Grandma to Prom, But School Says No — She’s a Danger!

78 Responses to “If He’s Got a Pecker, Run Like Hecker!” Good Morning America’s Hypocritical Advice About Stranger Danger