Update debybbhndn
from Philly.com, which was even kind enough to alert us to this!

Police on Thursday issued this statement: “On April 5th,2017, the parents of Baby Doe were located; they reported that their baby was fine and they did not believe that the male was attempting to remove the baby from the stroller.”

The video below ran in yesterday’s New York Post. It shows a man in a Philadelphia Dunkin’ Donuts who goes up to a stroller, leans over the hood from behind, places his hands into the stroller, and seems to be (to my eyes) trying to get a look at the child. Of course, that’s not how it was interpreted by the press or an onlooker, who attacked the man:

Anyway, the video was brought to my attention by Catherine Lavallee, a New England mom of two sets of twins, and her wise comments on Facebook echo everything I  believe. After one woman wrote: “It looks like he touched her AND was trying to grab a hold of her by her chest and neck.” Catherine responded:

I didn’t see that. It looked like he just wanted to look at her. It wasn’t appropriate, but it wasn’t “attempted kidnapping”

I think the more we fuel unnecessary fear and paranoia about kidnapping the more our village breaks down and the less help parents are able to get.

It seems highly unlikely that anybody would try to kidnap a baby in a public place with so many people standing around.

This is what the news does, though. They try to hype things up as much as possible in order to capture the public imagination, damn the consequences. Forget that it might fuel panic, or cause unnecessary paranoia. Next time somebody might get shot just for looking at a baby.

Legitimizing the fear that babies are stolen every day from bustling public places while the parents are RIGHT THERE but, to their eternal regret, glancing away for a second or two, is not just wacky, it is a wild-eyed, distrust-sowing, hate-filling, fear-fueling, men-demonizing, mom-shaming, child-crippling way to ruin society.

Not to put to fine a point on it.

But think of all the things this dystopian view of “our world today” does:

1 – We hate on any mom who takes her eyes off her kids, even for a moment.

2– We distrust any male who shows any interest in a child, interpreting it as “creepy” or prelude to a crime.

3 – We can’t allow kids any freedom, if we truly believe the second they are unsupervised, monsters are  ready to pounce.

4 – We start arresting parents who don’t subscribe to this Liam Neeson-movie view of the world and actually let their kids be outside without a bodyguard.

5 – We retreat into our homes or private places and slam the door in the face of community. Trust  no one, it’s not worth the agony of a child being kidnapped.

Clickbait is one thing. But the police also proceeding to act as if this minor interaction = attempted kidnapping comes with its own dystopian consequences: Men afraid to be around kids. And people charged with “potential” crimes that they did not commit.

We must reject these “almost” stories where nothing happens to a child, but “almost” did, or “could have.” They are not news, they are ghost stories writ as fact. And Catherine has the last wonderful word:

I must be the only person who has never encountered a potential kidnapper before. 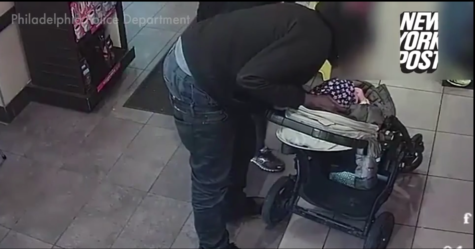 “What a cute little kid!”? Or, “I can’t wait to steal you from this bustling  Dunkin’ Donuts with your mom right over there!”

Teen Invites Grandma to Prom, But School Says No — She’s a Danger!
FIRST STATE IN THE NATION VOTES ON FREE-RANGE BILL OF RIGHTS! Would Decriminalize Parents Who Let Their Kids Play Outside or Wait Briefly in Car

69 Responses to UPDATE! EVEN THE PARENTS SAY THIS WAS NOT AN ATTEMPTED KIDNAPPING! Is This Really “Disturbing Footage of an Attempted Kidnapping at Dunkin’ Donuts”?