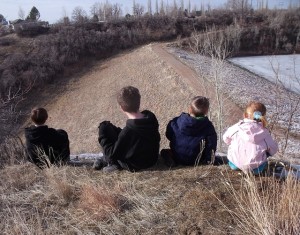 A dad’s comment about over-emphasizing the chances of the cops questioning Free-Range Parents strikes me as worth printing here:

Something we should all keep in mind is that kids who walk to the park without adults and are *NOT* stopped don’t make the news.  Just like the millions of kids who are not abducted by strangers don’t make the news.My just-turned-14-year-old has been walking (alone) to our local downtown (with bookstores and a library, amount other things) since he was about 10.  We’ve never had an incident.  But this isn’t news.So, what the Meitiv’s are going through isn’t right.  But we also shouldn’t assume that it is typical.  Just like we shouldn’t assume that child kidnappings are typical just because one happened 1,000 miles away and is now on the news 24/7.I don’t let my fear of child abduction drive my parenting decisions and I don’t let my fear of CPS drive those decisions either.

As the gal who hears almost all the instances of gov’t overreach when it comes to parenting (I’m the Nancy Grace of CPS), I can assure you I am appalled by each and every one. But I can also assure you this man is right — the incidents are not legion. YES we must fight the laws and officials that intrude on safe, sane parenting choices. NO we should not keep our kids inside, for fear of CPS.

The more kids we have flooding the parks, playgrounds, stores and streets, the safer and happier everyone is. And no busybody will call to report something strange and disturbing — “a child outside!” — because there will be just too dang many. – L