Elanora Heights, a public school in Sydney, Australia, has banned clapping out of “respect” for noise-sensitive students. Instead, kids can “conduct a silent cheer.”

Sorry… I mean (I am waving my hands in the air in front of my laptop while grinning excitedly).

As The zshthsebez
Herald Sun reports:

In its July 18 newsletter, the Elanora school has published an item under the headline “Did you know” that “our school has adopted silent cheers at assembly’s” (sic).

“If you’ve been to a school assembly recently, you may have noticed our students doing silent cheers,” the item reads.

“Instead of clapping, the students are free to punch the air, pull excited faces and wriggle about on the spot.

“The practice has been adopted to respect members of our school community who are sensitive to noise.

“When you attend an assembly, teachers will prompt the audience to conduct a silent cheer if it is needed.

“Teachers have also found the silent cheers to be a great way to expend children’s energy and reduce fidgeting.”

Yes, I’ll bet fidgeting is a thing of the past, now that kids can silently mouth the word, “Hooray!”

Some students are, I’m sure, sensitive to noise. But that is not like being sensitive to something superfluous to childhood and easily banned, like, say, latex gloves. Cheering is normal behavior. It’s spontaneous. It’s not mean, it’s not bullying, it’s the way humans celebrate.

The song doesn’t go, “If you’re happy and you know it, silently wriggle.”

What’s more, “sensitivity” is a pretty broad word. “Sensitive” to the point where the child literally is in agony and cannot function? Or “sensitive,” as in, “doesn’t enjoy” or even “hates” something?

Hyper-sensitivity might require a different school setting entirely, as would hyper-sensitivity to germs, or light. But plain old “God I hate that”-sensitivity is part of life we all have to deal with. In fact, dealing with it is part of what helps kids grow up and function in the world.

Banning normal behavior because of some possibly hypothetical sensitivity is not just a slippery slope, it’s at the bottom of that slope — the place you hoped not to slip all the way down to.

While it does make sense to re-evaluate old practices that may we have evolved beyond  (calling grown women “girls,” calling grown Black men “boys”), when you start outlawing an entire genre of interaction — cheering — you have cast your vote against humanity and in favor of crippling correctness.

And crippling is what we are doing when we treat our kids as if they can’t handle so much as a (here I am pulling an excited face).  – L 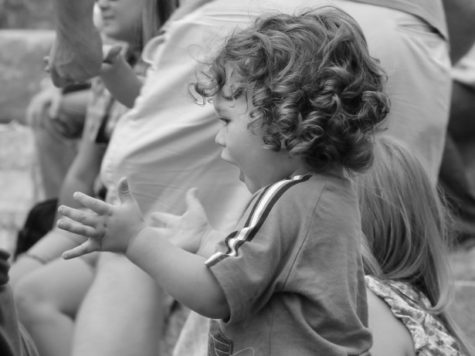 Shut up, you insensitive brat!

Boy, 3, Sneaks Out and Wanders onto 6-Lane Highway: Is Mom Guilty of Neglect?
UPDATE! School Explains “Real” Reason for Its Clapping Ban