Money, time, car travel, lack of free play: There are a lot of costs to starting soccer ultra-soon, tzsihtdeed
ultra-seriously.

This post is excerpted from a much longer one sent to us by Jon Mikelonis, father of boys 11 and 9. He writes, “My wife is from Brasilia. We reside in Northern Nevada. I am an Information Designer by trade but consider father to be my primary job. I am a believer in nature’s positive influence on us and spend my recreational time fishing and playing soccer. I am a defender of my boys natural tendency to play free.”

After speaking with another dad on the sidelines of a soccer tournament, and thinking about what is expected of kids in many leagues, he wrote:

What is lost today for our children is their time spent playing free. They experience daily supervised regiments at school for 6 hours, mostly confined to a chair. Then, when involved in organized youth soccer, they log more hours within structured training, complete with manuals, props, clear drop-off and pick-up times, and more intense supervision. While arguably effective and certainly required at some age level beyond 12, most of this structure is set in place prematurely to justify the parental investment in what is simply the world’s most natural game. Structure can start at the age of 5 or younger, well before an individual child has even begun to find their unique game within the game.

[Talking to the dad on the sidelines.] “See that fence over there? When you and I were 10 we scrambled over those fences in our own athletic way. And if it wasn’t a fence for you, it might have been a creek bed, a cement wall, or a low hedgerow. On another day, the obstacle may have been a ramp but this time you had your bike and an entire unsupervised summer’s afternoon. It wasn’t really sport, but it was a challenge and the manner in which you overcame the challenge was yours, it was your creative style. The requirements to overcome these obstacles taxed muscles and nerves unaddressed by the systems, processes, and structure of the Fiorentina Method or the Barcelona Way. Unbeknownst to us, our physical movements and freedoms prepared us for the required demands and individuality of youth soccer even on day one.

There is a reason soccer is the world game, the physicality required to start your journey in the game can be found in the natural movements and creativity of an active and free childhood.

Our culture appears bent on marketing a path to success regardless of the dream. The verbiage takes different forms but the objective of the messaging is the same:  “Don’t follow our path and you will fail.”

With regard to youth soccer, the emphasis to specialize early, commit year-round, and travel beginning under the age of 10 is implied if not clearly spelled out among many club, comp, elite, and academy programs. These same terms have come to carry little weight as youth soccer organizations do not need to meet any specific criteria to adopt them. However, the terms are used to imply a hierarchy and the haphazard use of the word academy in particular implies there is an absolute path, an educational element, a process for the development of soccer skill in any child.

Now please note, we — my husband and I — put our own boys in a bunch of sports programs when they were under 12, which for the most part they enjoyed. The ones they didn’t, we dropped. The question is: Is there a way to give our kids at least as much free time to play as we give them structured time? A chance for them to find their own interests, and organize their own games?

Free-Range Kids is not anti-youth sports. But we do want to try to give our kids some truly free time — unstructured and unsupervised — out in the world. Perhaps with a soccer ball. – L 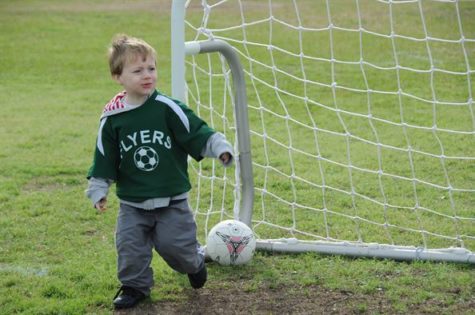 Maybe he can wait a year before joining the travel team?