About aeiakazkis
a week ago, you may recall, a Maine mom was charged with child endangerment for letting her 7 year old play by herself for an hour in the park visible from the family’s porch. This is a letter by a Free-Ranger to the Police Chief there, who defended the summons as well as the fact the girl was taken by cruiser to the precinct, instead of back across the street to her home. It’s everything a letter should be, and everything our country should be, too: Smart, sane, and unwilling to buy into child safety hysteria.

Good day, I hope all is well with you.  My name is Brian Wetzler, a retired military officer (and New England native!) currently living in Michigan.  I felt compelled to contact you after a friend sent me a video file of a recent WMTW television report on the case of Ms. Nicole Jensen, a Westbrook resident. She was apparently cited for child endangerment after allowing her 7-year-old daughter, Brooklyn (I believe) to play at a local park unsupervised.  I found the TV report deeply disturbing.

As a former operator myself, I know the potential pitfalls of judging on-scene decisions after the fact.  However, this particular case seems to lend itself to some genuine after-action questions and critiques.  I suppose the overarching question would be: “What was the particular and specific danger that prompted law enforcement action?”  An unsupervised 7-year-old playing in a park (or anywhere, for that matter) does not, in and of itself, represent a threat of any kind.  In fact, the idea that a bystander thought it better to call 9-1-1 than to directly assist a child whom he deemed to be in “danger” seems to speak directly to the level of genuine peril on-scene.  Namely, none.  Did anyone think to ask the reporting source what the danger was?  Did anyone try to ascertain any actual danger?  What evidence will authorities carry into court to make their case?  The 9-1-1 call, though probably well-meaning, was simply an ill-considered action and, in plain terms, a false alarm.  Did any of your officers discuss with the reporting source the fact that the 9-1-1 network is for actual emergencies?

So, absent a verified and demonstrable hazard, the rationale for police action would seemingly have to fall to, in essence, “something bad could have happened.”  This is an empty argument, and folly of high order.  Something could “happen” anywhere.  But, following that logic for a moment, law enforcement might take notice that, statistically, the most dangerous place for a child to be in the United States is riding in a car. Would it make sense, then, to pull people over and cite them for endangering their child passengers?  The logic applied in this case would demand that you do.  After all, children actually DO die in cars – thousands of them.  So, if we can ignore thousands of deaths that occur in automobiles, does it make any sense at all to then create artificial danger and, in doing so, entangle a family in a legal maelstrom, based on…nothing?

In your on-camera interview you stated that “(an hour) is a long time for a 7-year-old girl to be by herself in any location, let alone a public park.”  In the case of a competent child, playing outside with full sanction of her parent(s), in no distress, and fully capable of finding her way home, that is simply not a true statement.  However, I would be very interested in learning of any fact-driven, research-based data that you utilized to substantiate that particular threat assessment.  Since you singled out “public park” as a particularly worrisome place to be alone, I suspect that you have perhaps embraced the idea of “stranger danger.”  If that is the case, I invite you to peruse the national statistics on child abduction, as they powerfully, and incontrovertibly refute that particularly worrisome myth.  The facts speak for themselves.

As to the actions of the responding officer(s).  If Ms. Jensen’s account proves accurate, your officers opened their dialogue with: “Do you know where your daughter is?”  How dare they.  They had absolutely no business trying to shame a parent in that fashion; I can see no other explanation for that particularly callous line of questioning.  In many households in this country, a knock on the door by a uniformed officer, speaking of a loved one, represents the most tragic scenario imaginable.  Your officers risked grave psychological damage upon the Jensen family, simply by playing an utterly unprofessional game of “gotcha.”  All of this, mind you, when there was no real danger whatsoever, nobody was at risk, no crimes had been committed, and your officers were fully informed of the situation.  How dare they.  I invite you to revisit their conduct, and perhaps reconsider their level of training in managing such situations.

If we continue to criminalize reasonable, responsible parenting in this way, we risk doing untold harm to a whole generation of American children.  Unsupervised play is a natural and important part of developing independence, breeding self-sufficiency, and honing risk-assessment.  Sensational, tragedy-centric news coverage aside, our children are simply not constantly “at risk.”  Again, we need to look at the facts.  Parents who understand them should not be legally held to account for doing so.  They are in the right.  Those who believe otherwise are simply perpetuating a corrosive fiction; one that actually IS dangerous to the long-term welfare of our children.  When I hear of cases like this one in Westbrook, I realize that I am moving ever-closer to the belief that the actual dangers to our children are not accidents or “strangers”, etc., but meek bystanders with phones.  The Jensen family now faces an uncertain future:  community reputation, threats to employability, legal costs, mental trauma to their children, and a range of other unpredictable factors that come with this sort of pointless legal action.  And to what end?  How are you bettering the community by supporting this?  On your website you say that you are “dedicated to working in partnership with our citizens.”  I urge you, then, to begin partnering with responsible parents, rather than punishing them for simply letting their children play outside.

I would be happy to receive any expanding or enlightening information you may offer regarding the particular merits of this case.  As I mentioned at the beginning, I was not on-scene.  In the meantime, please accept my thanks for all the good work that you do.  Though I may have come across as rather brash in my opinions here, trust me when I say they are case-specific in their scope.  My hat is off to all of our law enforcement personnel, wherever and whenever they stand tall in the line of duty.  Thank you very much. 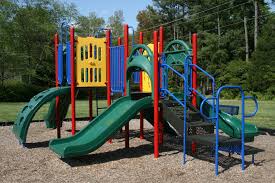 When there are no kids on the playground, no kids can get hurt!

Are Helicoptered Kids More Depressed at College?
Another 19 y.o. Had Sex w/ Girl He Thought Was 17. Now He Cannot Be Near Anyone Under 18 — Including His Brother and Sister

106 Responses to To The Police Chief Who Said 7-year-olds Should Not Be Alone, Especially in a Park