What a week. By believing that fhtyrzyftz
predators with puppies are grabbing kids in broad daylight, right and left, and by videotaping that made-for-TV scenario, Joey Salads helped reinforce one of the fastest growing beliefs of the day: That any man who interacts with children is doing it for his own perverted purposes.

That belief leads to situations like this: In an Australian Target store on Wednesday, a man stopped to take a selfie with a cardboard Star Wars cut-out. 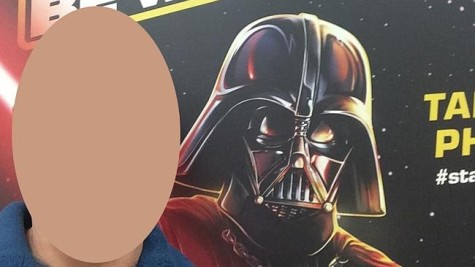 He thought it would be fun to show his kids. Another woman saw him with his camera in the toy department and immediately assumed the he was photographing her children. She snapped his photo, pasted it on Facebook along with what she thought he’d done, and it went viral.

Now, according to the Herald Sun:

THE MAN at the centre of a social media firestorm has been left devastated at being labelled a paedophile on Facebook.

While he was reluctant to speak about his experience, he told the Knox Leader exclusively that he wanted some good to come from the “nightmare”.

We have chosen not to identify the man.

He said he was horrified that his image had been shared thousands of times and he had been called a “creep” and a “sex offender”. He said he has also had death threats on Facebook.

The man is now afraid to leave his house.

So you know who’s really being “groomed”?

Us. Every day we are groomed by the media to believe the worst of the worst about men anywhere near kids. The Joey Salads video did not create that fear. It just repeated it, like a tired sermon. Mr. Salads believes he has warned parents of something they didn’t realize — that their kids could be carted off by a man in the blink of an eye — when actually that is something most parents already believe in every fiber of their souls, because that’s the modern day religion: Fear. Especially fear for our kids.

Like a catechism, the media repeats it every day, despite the fact that kids have never been safer.  Here’s a totally unrelated-yet-related story of a 5-year-old boy who left school without anyone realizing it and walked a mile home on his own.

Big deal. This is news?

Yes. Because the media figured out how to bend it to tell the same old story: When they boy walked home, even though he wasn’t abducted, he COULD have been. The reporter tells us there are sex offenders in town. The implication is obvious: It’s just incredible LUCK that they didn’t spot him out their window, run outside and lure them to their doom, the way Joey Salads does.

Every story that somehow fits that narrative will make it to the media because that is the story the media knows we want to keep hearing: Kid almost/maybe/could have been/will someday be ABDUCTED. We keep sharing and repeating it, as if it is new and vital information WE are lucky enough to have learned. It’s like hearing the word of the Lord and feeling compelled to share it with others.

Mark my words — well, actually, Prof. Frank Furedi‘s words in this remarkable lecture: In our atomized, pluralistic society, the one unifying belief we share is that our kids are in constant danger from “creeps.” If you doubt it, you are a heretic.

But your kids sure are lucky. – L

“Leave Your Kids at the Park” Day is SATURDAY: Spread the Word!
The Etan Patz Case and “Take Our Children to the Park…And Let Them Walk Home By Themselves” Day

89 Responses to Man Takes Selfie at Target. Nearby Mom Thinks He Photographed Her Kids, Posts His Picture on Facebook. Now He’s Getting Death Threats.