To book Lenore or inquire about a booking, please click here. You will be directed to a form at her nonprofit, Let Grow.

“We hosted a TED-style event on parenting with seven illustrious speakers. Lenore was a stand-out.  Virtually every attendee commented on how great she was. – YPO, Houston

“Great information and some pretty solid belly laughs! We had a great response from the attendees.” – Meaghan Muir, Boston Children’s Hospital/Harvard Medical School

“…had us doubled over laughing, sometimes at ourselves!” – Mom at Wellesley Mothers Forum, Wellesley, MA

“She points out how our obsession to protect our kids from any possible risk ends up denying them the freedom they require to grow into happy, confident, mature human beings. In spite of the serious topic, her presentation at DreamWorks was by far the funniest I’ve seen in a long time. ” – Claire Morrisey, Story Artist, DreamWorks

“Our audience literally did not want to leave.” Katharine Carol, Director of the International Children’s Festival, Vancouver

“She may be the World’s Worst Mom, but she is also one of the World’s Best Speakers.” – Michael Simpson, Head of Lower School, Greenhill School, Dallas

“Lenore made an indelible impact on our parents. While at first they flinched at the idea of ‘Free-Range Kids,’ by the end they could imagine letting go of their child’s hand and feeling safe.” – Matt Allio, Director, Walden School, Pasadena

“Few audiences understand the overwrought anxiety that plagues modern childhood better than today’s college students. Lenore had them laughing to the point of tears. Her message is as badly needed on campus as it is in K-12.” – Greg Lukianoff, President, Foundation for Individual Rights in Education (FIRE)

“One of the most useful and entertaining talks we’ve had in the 12 years I’ve been principal. Funny, yet utterly persuasive.” – David Getz, Principal, East Side Middle School, Manhattan

“One of the most talked about lectures of the semester.” – Sandra Bishop, Assistant Director, Yale Child Study Center

You get the idea. Funny, deep, engaging.

To inquire, go ahead and click here. But if first you want to read more about her, we won’t stop you! 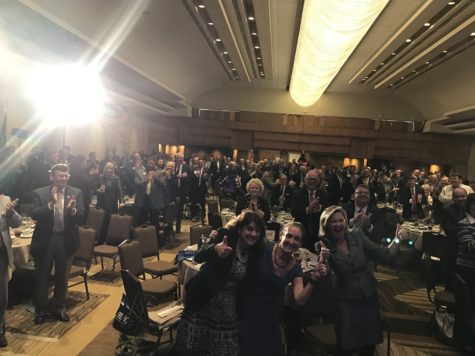 Here she is in Vienna (yes, that is one huge room!): 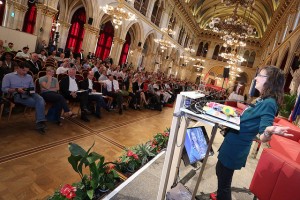 Her feisty belief that our kids are safer and smarter than our culture gives them credit for has landed her on talk shows from The Daily Show to to Dr. Phil to The View, The Today Show, NPR, Good Morning America, Nightline, ABC World News Tonight, CBS Early Show, CNN, FoxNews, Anderson Cooper, the BBC, CTV and CBC.

She has lectured internationally, from Microsoft Headquarters to DreamWorks to the Bulgarian Happiness Festival (a real thing!), and she has written for everyone from The Wall Street Journal to Mad Magazine. Yep. TheÂ Mad Magazine. And she’s a graduate of Yale. 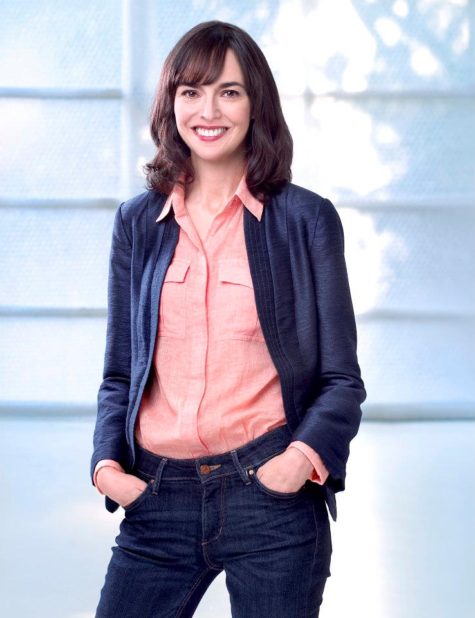 On her Discovery Life reality show, “World’s Worst Mom” (a.k.a. “Bubble Wrap Kids” in Canada) Lenore is like the Supernanny. Except instead of dealing with out-of-control KIDS, she deals with out-of-control PARENTS who have taken over-protection to extremes. Some don’t let their school-age kids play on the front lawn or even make themselves a sandwich. (Why not? Knives!) One still drags her 13-year-old son into the ladies room.

Over the course of her visit, Lenore pries the kids away from their folks and has them walk to school, play in the woods, or run a lemonade stand while she films them from afar. Once she shows the parents how independent and happy their “babies” can be, the parents change…forever! Months later, the moms are still in touch with Lenore, bragging about all the new things their children are doing…on their own! The change, in other words, is lasting — and joyous.

It’s a change that Lenore brings to her lecture audiences, too: Fast, shocking, lasting, happy change.

“Who knew a presentation on the disappearance of childhood could be entertaining? Lenore Skenazy’s keynote at the Campaign for a Commercial-Free Childhood’s summit had the audience rolling in the aisles. I lost count of the people who told me afterward that she was best speaker they had ever seen.“â€“ Josh Golin, Associate Director, Campaign for a Commercial-Free Childhood, Boston

“Lenore Skenazy is a brilliant satirist, comedian and motivational speaker with a hilarious take on the insanity of modern parenting.Â  She points out how our obsession with safety drives us to protect our kids from any possible risk, how the media stokes the fear that fuels this obsession and how it all ends up hurting our kids, by denying them the freedom they require to grow into happy, confident, mature human beings.Â  In spite of the serious topic her presentation at DreamWorks was by far the funniest I’ve seen in a long time.Â  Whether you end up agreeing with her or not– and I think many of us did– you’ll be thoroughly entertained.” — Claire Morrisey, Story Artist, DreamWorks

“Lenore spoke at the 2016 Moms Meet WOW Summit. Her speech was eye-opening for me. My daughter is applying for colleges in mainly urban areas and Iâ€™ve been terrified of her attending anything other than a tree-lined suburban campus. At the Summit, Lenore was not only educating the mothers of young a children in the audience about raising safe, self-reliant children, but also moms of older kids like me. She helped me realize that it was time to stop being the helicopter mom that Iâ€™d been for 18 years and let my daughter experience life, her way. Thanks Lenore.” –Â Maxine Wolf,Â CEO, Media May GroupÂ

“Our parent community was so lucky to be able to have Lenore speak.Â  She was engaging and funny, but most of all thought-provoking about the many ways in which we don’t trust our own parenting skills (do we really need a plastic tub toy to tell us when our child’s bathwater is too hot?), and how we don’t allow our children the opportunities to take the important â€˜baby steps’ toward independence and responsibility. Â A great evening!” â€” Judy Sanders,Â Principal, Kensington School, California

“I was in stitches laughing.Â  The story about what it would take for a person to actually abduct a baby from the stroller at the store was so true! I really do think there is something to be said about encouraging kids to do things on their own as much as possible, within reasonable safety limits. Thanks for a great speech.” â€” Terri Lynn, mom

“Meeting Lenore in public was a joy and she was extremely funny and as interesting as her book. The best part of her lecture was realizing that we need to come together as a community in order to feel safe.” â€” Lindsey Ladd, mom

“Lenore kept a room full of us parents glued to our chairs, hanging on every erudite but entertaining word. She and her book and movement are a gust of fresh air. Run, don’t walk, if there’s a chance to hear her speak!” â€” Julie Ann Kodmur, mom

“I felt like I was out at a stand-up comedy show. Her comments and props about our paranoid society were right on as far I’m concerned â€” and delivered in such a comical way. She made it easy to hear the statistics and research.”Â â€” Aimee Nalle, mom of 8- and 11-year-old

“I saw Lenore Skenazy in Rochester in March 2010. She spoke before a sold out crowd and generously stayed until the very end to sign every last book sold. No-one wanted her to leave, and many of us wished we could have taken her out for coffee to continue the conversation â€” because she is just like us! Lenore is, simply put, hilarious and brilliant. Her statements are well researched, and her humor brings levity to topics which seem to create a lot of controversy. For those of us who remember roaming free during our childhoods and long for the same kind of freedom for our children, Lenore reminds us not to believe the hype and allows us to relax (for an hour) and believe that we are not crazy for leaving our children outside, unsupervised, for â€” at least â€” a few minutes!”Â â€” RenÃ©e Schuls Jacobson, Rochester, NY

And from Common Ground, a consortium of 14 private schools in Princeton, N.J.:

“Lenore had a crowd of 200 laughing so hard that many of my friends said they felt like they’d just seen a great comedy show. Her speech was one of the most entertaining and enlightening ever. It showed that we can trust ourselves and our children so they actually learn to trust themselves. All parents, helicopter or not, would benefit from her talk!” – Prof. Joann Messina, Princeton, NJ

“Anyone interested in seeing our children develop greater self-confidence and resilience would do well to read her book and hear her speak.” – Olen Kalkus, Headmaster, Princeton Academy

“I feel relieved – someone who is finally telling us to relax and let go instead of giving us a list of ‘to do’s’ as parents.” 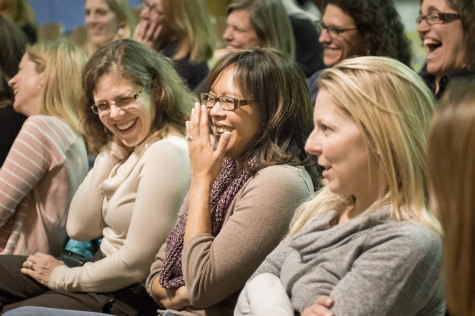 Audience reaction to Lenore. Your audience will be laughing — and changing — too! (And everyone’s hair will look great.)Â

To book Lenore, you know what to do by now, right? Here you go!Â 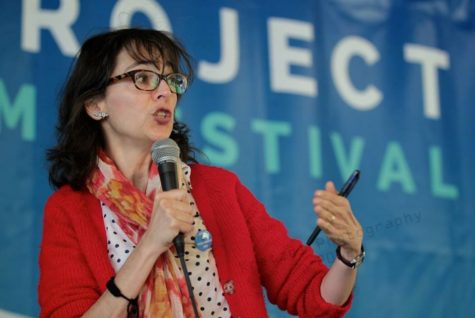