Recognizing the chilling effect a successful lawsuit against a school could have, a judge in Dublin denied payment to a family whose child had fallen and broken her arm during a Â schoolyard game of chase.

Games of chase in school yards throughout the country could not be prohibited, the President of the Circuit Civil Court, Mr Justice Raymond Groarke, ruled today Monday.

â€œI just cannot accept the proposition that they should,â€ he told barrister Adrianne Fields who successfully defended a â‚¬38,000 damages claim taken against a school on behalf of a six-year-old pupil.

She had sued the school on the basis that its staff had been negligent in having failed to stop a game of chase, in which Veronika was engaged during a lunch break in the hard surfaced school yard in April 2010.

Sadly, Veronika fell, breaking her arm, and other kids fell on top of her. If I was Veronika, or a member of her family, I’d be dismayed. But would I truly believe that the game should have been stopped? That all running games should be stopped, just in case? That it was sheer employee negligence that allowed kids to run around?

That’s pretty much what her side said. But —

â€œShe was engaged in a game of chase pure and simple and, while it is most regrettable that she became unbalanced and fell, this was simply an old fashioned accident and I fail to see any liability on the part of the school for that accident,â€ Judge Groarke said.

Score one for those of us who understand that there is NO activity, even climbing out of bed, that is always 100% safe. So if we start outlawing activities that are generally, but not 100% completely safe, we will end up outlawing any movement whatsoever.

The judge also seems to realize that something is LOST even if a modicum of safety could be gained. Are kids really safer if they do NOT run around, use their bodies, burn calories, learn to play, deal with disappointment, organize their friends, and create something out of nothing — a game?

Nope. Kids need to play. It’s what they are programmed to do, by nature. Taking it away because a girl hurt her arm is like taking away food because someone somewhere choked.

Kudos to Judge Groarke. And, while we’re at it, what a cool name. – L. 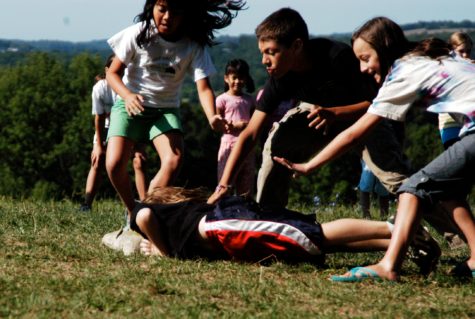 How to Escape a Zip-Tie, A “Must See” for All Kids???
BOLD SOCIAL POLICY, 2017: Five Years After Girls’ Severe Sunburn, Washington Considers Bill to Let Students Use Sunscreen Without Doctor’s Note

51 Responses to Mom Sues After Daughter Hurt Playing Tag on Playground: “School Should Have Stopped It”