Readers tbnbzbrirf
— The belief that our kids are in constant danger from the worst of the worst of the WORST can (and did) lead to cases like this. As reported in Saturday’s Austin American-Statesman by Chuck Lindell —

It was the early 1990s, when a cottage industry of therapists, authors and investigators argued convincingly — and, in hindsight, absurdly — that a national network of secretive cults was preying upon day care children for sex and other horrors.

Despite a vigorous investigation in the Keller case, at least four law enforcement agencies found no proof of satanic activity. Even so, Travis County prosecutors presented enough other evidence to convict the Kellers of sexually assaulting a 3-year-old girl in their care. Both were sentenced to 48-year prison terms.

“We were bullied and assaulted pretty much the entire time,” she told the American-Statesman. “Other inmates, they’d scream at you while assaulting you, yelling, ‘You want to do this to children? Well, we’ll do it to you.’”

Denied parole three times, the Kellers won early release last year when the criminal case against them collapsed. The only physical evidence of sexual assault was found to be a mistake…

You can read the rest here. And to understand HOW we could have possibly believed these charges (including claims that the children were taken on private planes, molested abroad, and returned in time for day care pick up) check out Satan’s Silence, by Debbie Nathan and Michael Snedeker.

But while the “Satanic” part of this panic seems to have died down, the obsession with sex offenders has, if anything, grown.

As a result, you can find people in prison today for “crimes” including consensual sex between teens. Meantime, apps pinpointing the homes of sex offenders mean millions of terrified parents are yanking their kids inside,  even though a study by the Georgia of its 17,000 sex offenders found only “5% were clearly dangerous.”

In other words, we are ruining the lives of thousands of people who do NOT pose a threat to our kids, as well as severely compromising our own kids’ lives, merely because we are in another (or continuing) predator panic.

So even as we gnash our teeth about the Kellers, let’s agitate to dial back our Draconian sex offender laws, especially the idea of a public registry, which has not made children any safer.

DO find and deal with real dangers. Do NOT inflate or even conjure up fake ones to satisfy some deep desire to save kids.

For more on reforming the Sex Offender Laws, see this.

And for more on the Keller case, see this. – L 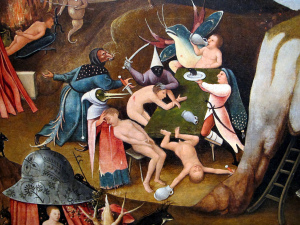 This did NOT go on at the Keller’s day care center. (Painting by Hieronymous Bosch)