Here is an ekizkdkbbe
interview with my friend and hero, Dr. Peter Gray, author of the mind-opening book, Free to Learn. He is interviewed by another friend and hero of mine, Nick Gillespie, the editor in chief of Reason.com and Reason TV, which produced this piece.

“School has become an abnormal setting for children,” says Peter Gray, a professor of psychology at Boston College. “Instead of admitting that, we say the children are abnormal.”

Gray….says that a cultural shift towards a more interventionist approach to child rearing is having dire consequences. “Over the same period of time that there has been a gradual decline in play,” he told Reason’s Nick Gillespie, “there are well documented, gradual, but ultimately huge increases in a variety of mental disorders in childhoodâ€”especially depression and anxiety.”

Gray believes that social media is one saving grace. “[Kids] can’t get together in the real world…[without] adult supervisors,” hes says, “but they can online.”

Gillespie wondered how much helicopter parenting is simply a reaction to women going to work, creating the worry that kids, now less supervised, are at risk?

“That certainly plays a role,” said Gray. “But my argument is there’s nothing about today’s world that should be preventing free play for children. We’ve got to figure out how to allow it to happen.”

Instead, said Gray, we keep expanding school into kids’ free time: Recess time is shorter while the school year is longer. And the hours after school are filled with supervised, structured activities that are basically just…more school. “We’ve truly become insane in this belief that children need so much schooling,” he says.

With so little time on their own, solving their own problems, said Gray, “Students are going off to college for the first time and now they are having psychological breakdowns about things that in the past would have been regarded as bumps in the road of life. Roommate disputes, the breakup of a romantic relationship –”

“And A-minus,” added Gillespie, who himself wrote a seminal piece in 1997 — long before most of us had noticed the helicopter problem — titled, “Child-Proofing the World.” I’ll excerpt in a later post. It is just fantastic.

But for now, settle down and watch these guys make sense of our world. – L. 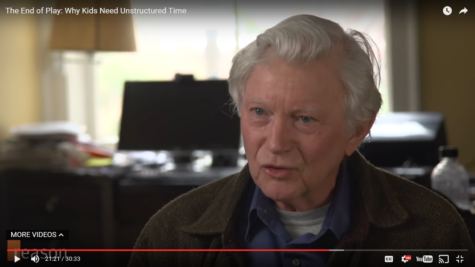 Peter Gray says school is taking over our kids’ lives like kudzu.

Would Your Kid Go Off with a Stranger and His Puppy?
This is It! A Concrete Plan for Parents who Want to Start Free-Ranging!

30 Responses to Peter Gray: Instead of Saying So Much SCHOOL is Abnormal, We Say Squirming STUDENTS are Abnormal