When yet another anfyyatynk
mom wrote about her kids ALMOST being sex trafficked — an assessment she made on the basis of noticing some men at Ikea (yikes!) who seemed to be looking at her children — I checked my favorite urban-myth-busting, hysteria-slaying site, Snopes, searching for “Ikea sex traffic.”

There wasn’t anything there — Â yet.

Now there is:Â a gloriously rational take-down of the idea that predators are prowling the aisles of popular stores, tearing children away from their moms, racing them out to their cars and then across state lines, without anyone stopping them. Not the screaming mothers. Not the kicking kids. Not the stunned customers. Not the no-nonsense lady at the door who checks your receipt to make sure you’re not STEALING anything. Not the cops. No one. Nope. It’s just a quick, easy way to get a child or, in the case of the mom with the viral Facebook post, her three children at once.

So bask in this newest Snopes entry, and enjoy the fact that you read a lot of it here first:

Missing from the constellation of these hair-raising tales was documentation that abductions are commonly (or even rarely) being carried out in the described manner, as crime statistics donâ€™t seem to back up claims that such a ruse is truly happening â€œall over.â€ Free Range Kids author (and advocate for reason-driven parenting) Lenore Skenazy addressed the uptick in such reports on social media, pointing out their illogic and pleading for a realistic approach to the growing number of social media abduction horror stories:

The reader who sent me this link asked if I thought there might be some â€œvalidityâ€ to it, to which I must respond: No. In fact, I think itâ€™s crazy. What, two men are going to grab two or three kids, all under age 7, IN PUBLIC, in a camera-filled IKEA, with the MOM and the GRANDMA right there, not to mention a zillion other fans of Swedish furnishings?

Can we please PLEASE take a deep breath and realize how insanely unlikely that is? How we donâ€™t need to be â€œwarnedâ€ about this? How NOTHING HAPPENED!

And hey — while you’re visiting Snopes, please check out the other child-danger rumor that refuses to die: The one where a child is snatched at a fair, or store, or Disneyland, and dragged into the bathroom, where his/her hair is dyed or cut off, so even if people are looking for this particular tyke, they’ll be thrown off by the new look.

This myth has been circulating for decades, says Snopes. But a few summers ago, my neighbor told me never to take my eyes off my kids while shopping, because this terrible near abduction/haircut thing had just happened to a friend of a friend hers, and (of course), “It’s happening all the time.”

Which is true: Scary stories about child predators are happening all the time. Thus we hail Snopes — and thank them for adding us into the mix. – L. 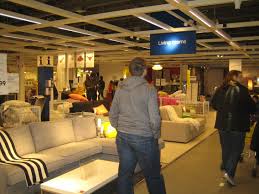 OMG — there’s another one of them! A MALE! At Ikea! We all know what HE wants!

The Modern American Brag: â€œMy Kids Were About to be Trafficked, Too!â€
Breastfeeding Is Not The Only Decent Way to Feed a Child