One reason we believe in giving kids back their freedom to roam is that not every lifelong interest is spurred by an extracurricular class or educational video. Many ideas, even careers, begin in the woods, the weedy lot, the streets of downtown — or sometimes in buckets, as this haatzfyatk
lovely essayÂ in Science Magazine illustrates:

My Metamorphosis, by Elizabeth Marchio

I grew up in the 1980s and 1990s, in a lower-middle-class suburban neighborhood on the outskirts of Columbus. Our home didn’t have air conditioning or cable television, so there was little reason to ever be inside. At 10 years old, I was allowed to roam the neighborhood unsupervised. I bicycled everywhere, climbed trees to catch tree frogs, and searched for aquatic life in the local creeks, among other clothes-ruining endeavors. One formative experience occurred at a housing development a mile from my home, when I came across a pool of water in the massive tire tracks of a dump truck. It was 2 feet deep and muddy. I peered into the pool, holding my small, green net in one hand and a bucket in the other, searching for movement. I spotted my quarry in the warm, shallow edges: dime-sized black spots zooming to the depths as my shadow passed. Tadpoles!

I stalked through the pool, my shoes squeaking and sliding in the mud. After much splashing and several failed attempts, I caught oneâ€”but this was not the leopard frog tadpole I expected. It had a remarkable red tail. I couldn’t believe it! I had something I had never seen before!

After collecting a couple of dozen of them in my greatly excited state, I hung the bucket on my handlebars and sloshed home….Two weeks later, the bucket clamored with metamorphosed froglets, which I identified by a field book as Copeâ€™s gray tree frogs (Hyla chrysoscelis). When they started scaling the sides of the bucket, I realized it was time to return them to the collection site. I pedaled out to their natal pool to find it had been bulldozed. I released them in my backyard instead. My path into science started here.

You can read the rest of Elizabethâ€™s piece here â€“ quite a ride.Â And what Iâ€™d love to hear FROM YOU are the lifelong journeys that began when YOU were exploring the world, UNSUPERVISED.

What age? What did you do? How does it echo to this day?

What a great way to remind us all, and maybe even CPS. that if we want children who area curious, enriched and involved, we have to give them time and space and trust. â€“ L. 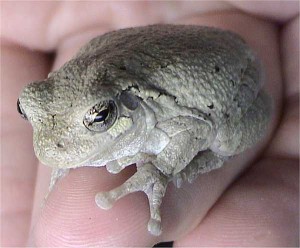 You don’t have to kiss me for me to change your future, kid.

DC Parents Who Left Toddlers in Car for an Hour Face Possible 10-Year Sentence: Good?
Was this Footage FAKED? Children Walk on EARTH!

31 Responses to TELL US: How Did Your Adventures as a Kid Influence the Person You Are Now?