Ever hbaatbytaf
wonder why most of the parents in children’s literature are far away or dead? Melinda Moore did. She’s a mother of three and “speculative fiction” author, who tweets @MelindaJMoore and is on Facebook here. She posted this story on her blog, Enchanted Spark. 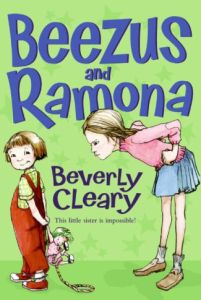 Where are their parents?!?

When I first started writing, my goal was to be a children’s and YA [Young Adult] author. I’m not sure what happened except that my ideas for protagonists became older and older. But this month, I’ve been working on a story for my two daughters for Christmas. The story takes place in a world I’ve been building for over a decade. Years ago, I created the parents to be perfect. I realize now that parents in stories can be mostly good but definitely not perfect. Making the changes got me thinking about great parents in children’s literature, and I made the sad realization that they would most likely be arrested for neglect in today’s society.

I’m not talking about the Dursleys from Harry Potter who everyone loves to hate. Clearly, they are horrible guardians and readers recognize it. I’m talking about parents like the Quimby’s from the Ramona books, who, on first glance, seem like reasonable, middle class parents. But, judging by recent news articles, somebody on Klickatat Street needs to call the cops on them.

In the book Beezus and Ramona, the two girls walk to the community recreation center on Friday afternoons. Beezus is nine and Ramona is four. It’s not just a walk down the street either. It’s described as going to the shopping district, by the drugstore, by the radio and phonograph store and on to the park. But I haven’t gotten to the worst part yet: Ramona is left alone to play in the park while Beezus goes to her painting class in the recreation center.

I never thought this was such a crazy story either as a kid or an adult. But in the summer of 2014, a mom was arrested for letting her nine-year-old daughter play at a local park while she worked at McDonald’s. The girl not only had a cellphone to call her mom, but also social workers were frequently at the park handing out free breakfasts and lunches. Sounds to me like the mom thought things through. She’s even quoted as saying she thought the park was a better place for her daughter to spend the day than sitting at a booth in McDonald’s. But this mom had her daughter taken away. They were eventually reunited, but what a horrible event.

I’m going to pick on the Quimby’s one more time. Again in Beezus and Ramona, Ramona wanders far from home in search of the end of the rainbow. This time, she is picked up by the police. But the police just bring her home. They don’t arrest Mr. and Mrs. Quimby or anything. That’s not what happened to an Ohio dad whose kid wandered away from the house in the summer of 2014. The child was outside with his two siblings on a Sunday morning. When the church bus arrived to collect them, the kid did something very Tom Sawyerish: he didn’t get on. When the bus left, the eight-year-old took off to the Family Dollar store a mile away. The police brought him home and arrested the dad. The dad also worked at McDonald’s and lost his job over the incident.

And what about Arthur, by Marc Brown? Okay, so he’s an aardvark, but clearly he’s supposed to represent your average third grade boy. Arthur has many independent adventures. In one book, he’s asked to babysit two four-year-olds while their grandmother goes to a PTA meeting. They aren’t just any ordinary four-year-olds, though. They’re the terrible Tibble twins who are known for eating babysitters alive.

Did I mention Arthur is only in the third grade? It’s a rough couple of hours, but in the end, Arthur discovers telling the twins a story is the secret to keeping them calm. The grandma comes home and all is well. But that didn’t happen for two parents in NY who left their twelve-year-old to babysit his two younger siblings. When the dad came home at two in the morning, he realized he didn’t have a key and had to break into his own house. That’s when a neighbor called the cops. When the mom got home, both parents were arrested for leaving their kids home alone. The mom later lost her job as a middle school teacher. What?

And then we have Encyclopedia Brown, a kid detective solving cases on his own at age ten, and How to Eat Fried Worms, where the kids have so much time away from parents that they spend all summer betting on eating worms, and Tales of a Fourth Grade Nothing, where kids are again left alone in the park. More recently there’s Ivy and Bean, where the two girls wander all over Pancake Court with no supervision. And in The Magic Tree House kids are allowed to run free in a nearby forest. And on and on.

So are children’s authors horrible people who should never be parents? No. They know the secret to an interesting childhood is a nurturing home environment where the parents give their kids time to be independent. I think society as a whole needs to read more children’s books.

Lenore here: Me too. Including cops, prosecutors, judges and politicians.

A Girl Walking Down the Street — and the Cops. Twice.
Say Happy New Year When It’s 2015 in Your Country!

48 Responses to The Parents in Children’s Classics Would Be Arrested Today (Looking at You, Beezus and Ramona’s Mom!)