Throughout most of history and to this day in some of the world, children learned the great lessons they needed to know — survival, stories, how to gut a goat — without going to school. Often they weren’t even “taught.” The assumption was that kids were naturally curious and would learn by watching, imitating, trying, and being expected to help out.

In this kezieaeiff
piece in the Wall Street Journal, Alison Gopnik wonders how come we have such a dim view of our kids that we assume they are less curious and competent than any earlier generation. It begins with Gopnik, author of “The Gardener and the Carpenter: What the New Science of Child Development Tells Us About the Relationship Between Parents and Children,” watching a 1927 film of kids at the Harold E. Jones Child Study Center in Berkeley. She sees a 5-year-old using a saw and can’t understand why no one stops him:

My 21st-century reaction reflects a very recent change in the way that we think about children, risk and learning. In a recent paper titled “Playing with Knives” in the journal Child Development, the anthropologist David Lancy analyzed how young children learn across different cultures. He compiled a database of anthropologists’ observations of parents and children, covering over 100 preindustrial societies, from the Dusan in Borneo to the Pirahã in the Amazon and the Aka in Africa. Then Dr. Lancy looked for commonalities in what children and adults did and said.

In recent years, the psychologist Joseph Henrich and colleagues have used the acronym WEIRD—that is, Western, educated, industrialized, rich and democratic—to describe the strange subset of humans who have been the subject of almost all psychological studies. Dr. Lancy’s paper makes the WEIRDness of our modern attitudes toward children, for good or ill, especially vivid.

He found some striking similarities in the preindustrial societies that he analyzed. Adults take it for granted that young children are independently motivated to learn and that they do so by observing adults and playing with the tools that adults use—like knives and saws. There is very little explicit teaching.

And children do, in fact, become competent surprisingly early. Among the Maniq hunter-gatherers in Thailand, 4-year-olds skin and gut small animals without mishap. In other cultures, 3- to 5-year-olds successfully use a hoe, fishing gear, blowpipe, bow and arrow, digging stick and mortar and pestle.

Of course, those kids do not need to learn long division, or coding. But what they are learning that our kids are not is how to handle risk, and how to learn on their own. Gopnik concludes, as we often have right here:

But trying to eliminate all such risks from children’s lives also might be dangerous. There may be a psychological analog to the “hygiene hypothesis” proposed to explain the dramatic recent increase in allergies. Thanks to hygiene, antibiotics and too little outdoor play, children don’t get exposed to microbes as they once did. This may lead them to develop immune systems that overreact to substances that aren’t actually threatening—causing allergies.

In the same way, by shielding children from every possible risk, we may lead them to react with exaggerated fear to situations that aren’t risky at all and isolate them from the adult skills that they will one day have to master. We don’t have the data to draw firm causal conclusions. But at least anecdotally, many young adults now seem to feel surprisingly and irrationally fragile, fearful and vulnerable: I once heard a high schooler refuse to take a city bus “because of liability issues.”

Actually, it’s not just children thinking that way. It’s our whole culture. When moms are arrested for letting their kids do something as innocuous as play outside (without a saw!), it’s clear that it’s not just kids who are lumping together all risks, from the tiniest to the biggest. It is an entire society that has somehow blinded itself to any gradations of danger, and declared that none of it, not even the smallest speck in return for a huge reward, is “worth it.” 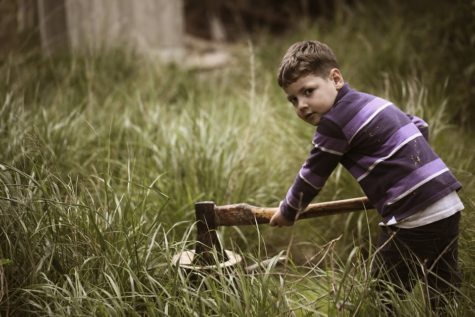 47 Responses to Toddlers With Knives