Hi fdinsikftn
Folks! Did you know I write a weekly syndicated Â newspaper column? Yup. Been doing it for seven years, through Creators Syndicate. (And dare I suggest, maybe your local paper should run it? It’s not always about Free-Range topics. I cover everything from bioterrorism to Barbie.) Â Anyway, here’s my latest, about a letter you read here, and a case far away. – L.

Abductions. Earthquakes. What do they have in common besides the horror they create?

They are both, to a greater or lesser extent, random. And randomness â€” call it “fate” â€” is something we 21st century humans have a very hard time accepting. To see how hard, let’s look at a recent verdict in Italy and a recent murder here in America.

The verdict has to do with a deadly earthquake in the Italian town of L’Aquila in 2009. Before the quake, there were some tremors. Scientists were asked whether they thought these indicated an earthquake was imminent, and they said they weren’t sure, things could be fine, and science does not possess the power to predict the unpredictable.

Less than a week later, an earthquake did decimate the town, and 309 people died. At which point the scientists’ earlier lack of a definitive “GET OUT THIS INSTANT!” landed them in court. Their year-long trial ended this past week. All six were found guilty of “multiple manslaughter.” They were sentenced to six years in prison (each) and fined $12 million to cover the court costs and pay the victims. Said one of the convicted, “This is medieval.”

To see how modern, take a look at this letter I got about the Jessica Ridgeway case in Colorado. Jessica was walking to school earlier this month, when she was abducted and killed. That morning, the school had called her mom to say she was absent, but the mom, who works nights, was asleep with her phone in another room, so she didn’t hear it. This letter, from a mom named Amber, was sent to my “Free-Range Kids” blog:

“As a mom, especially a single working mom, I have my cell phone always left on and near me … in case … the school or my kids ever need me during the day. … I know a lot of other parents who do the same thing and for me at least, it is a pretty standard and common sense practice.

… I’m sorry I’m going to say it … but LAZINESS, SELFISHNESS, and irresponsible actions (were taken) by the mother in this case. … I just feel this mother took her (daughter’s) … safety for granted.”

Amber concludes that no one ever should let his or her kids walk unescorted to school, because the child could die. It sounds as if, if it were up to her, she would convict the mom of manslaughter for not predicting and preventing the unpredictable â€” that out of the blue, her daughter would be abducted.

This kind of angry blame â€” by courts and by society â€” is the end of rationality as we know it. If scientists worry that any time they make a prediction they could end up in jail, they’ll either shut up entirely (already, the head of the Italian commission on seismic risk has resigned, as has his deputy), or issue alarms even when the likelihood of danger is tiny, re-calibrating their instincts from rational to hysterical. Wolf! Wolf! Wolf!

Likewise, when we have a culture that blames parents for not treating every walk to school like a trip through a firing squad, we re-calibrate society, too. And instead of accepting the small amount of risk that comes with just plain living, we demand excess precaution all the time. If you’re not proceeding as if your child is in constant danger, society chides, you’re doing something wrong. This explains the helicopter parenting movement.

It is really hard to accept the fact that bad things happen, sometimes out of the blue. But to tell ourselves we could avoid them all if only we were better-prepared is worse than wishful thinking or even medieval thinking. 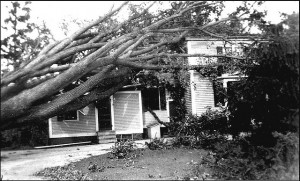 An Old-Fashioned School Thanksgiving, Except…
Happy Halloween and a Note from New York

44 Responses to A Blame for Every Death