rfznfybizh
A confession: I learned to ride a bike when I was 9, probably the oldest of all my friends. Maybe I started a trend?

Dear Free-Range Kids: I was recently visiting the Long Island town I moved away from several years ago, and was visiting some old friends. I have a 7-year-old daughter, and she was at a playdate with several kids, ages ranging from seven to ten.
Â
I was absolutely shocked to learn that my daughter was the only child out of the whole group that knew how to ride a bicycle. The rest of the kids still had training wheels on their bikes.
Â
Can you imagine an eight year old boy riding around a bicycle with training wheels when we were kids? I think that kid would have dropped to the bottom the earth in shame!
Â .
What is happening? Have you heard any similar stories about kids not riding bikes these days? In my town in Colorado, I see kids riding around on bikes all the time!

Chime in! I really wonder if kids are learning later. And if they are, what are the factors? Is this the kiddie equivalent of young people waiting to get their driving licenses? (And is a New York Times reporter reading this blog? Are you looking for a front page story? You’re welcome.) – L
.
UPDATE: Anita from Colorado, the mom who wrote the letter above, adds:

The kids I was with did have training wheels on their bikes, and were riding around. In fact, at one point,Â we were on a “bicycle playdate” where the kids rode their bikes around on a tennis court.

.
I talked to all of the parents about why the kids weren’t riding without training wheels,Â because I was so shocked. I heard a fewÂ reasons:
.
1. Kids aren’t riding bikesÂ around the neighborhood anymore, so kids don’t have the same motivation to learn to ride.
.
2. Parents don’t want to push their kids to do something they don’t want to do (i heard this the most)
.
3. Parents are concerned for the kids safety riding bikes.
.

The guy who created it deserves a nobel prize. After 2 days of trying to teach my daughter to ride that involved lotsÂ screaming, tears, and blood, i found pedal magic and taught her in 20 minutes. 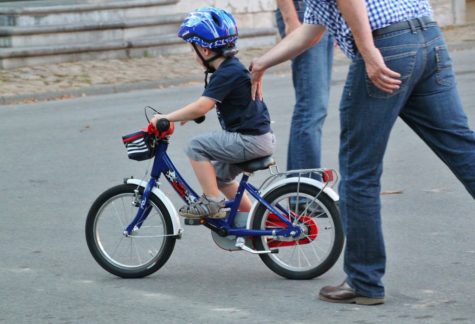 Are kids learning to ride bikes (or taking off their training wheels) later?

93 Responses to UPDATE! Are Kids Learning to Ride Bikes Later?