If this doesn’t convince lawmakers that they had better start revising the child neglect laws — and convince politicians that supporting Free-Range legislation would be a great, vote-getting platform — I’m not sure what will. I got this letter a week ago and was waiting for the mom’s permission to run it. Got it. Â Boldface mine:

My ikhiriksfs
children are not free range children.Â Â The younger one has always had a baby sitter.Â Â The older one who just turned 11 a couple of weeks ago always had a baby sitter as well.Â Â This school year that changed.Â Â The eleven year old comes home and is met by his dad who lets him in the house.Â Â In the event dad isn’t here on time, his instructions are to wait in the backyard until I come home about 20 minutes later.

On this particular day, a little more than a month ago,Â Â both dad and I were both running late due bad traffic and rain.Â Â We were about and hour and a half late.Â Â When we arrived the police had been anonymously called and we were arrested for child neglect.

We still do not have our children, we are fighting for our own freedom and due to the nature of my employment I am no longer employed.Â Â My son was in his own yard playing basketball, not in the street or at the park.Â Â The authorities claim he had no access to water or shelter.Â Â We have an open shed in the back yard and 2 working sinks and 2 hoses.Â Â They said he had no food.Â Â He ate his snacks already.Â Â He had no bathroom, but the responding officer found our yard good enough to relieve himself in while our son sat in a police car alone.Â Â In his own yard,Â Â in a state,Â Â Florida, that has no minimum age for children to be alone.Â Â If you have any advice for what I should do I will accept it.

The advice I gave was to contact The National Association of Parents, which fights for the rights of parents (including the Meitivs)Â to raise their kids without government interference, except in cases of clear and convincing evidence of actual or imminentÂ harm. That threshhold is a far cry from whatever horrors are visited upon Â tweens playing basketball while waiting for their parents to get home. (To support the Association of Parents with a donation, go here.)

Then on Friday, the mom wrote back:

I just wanted to give you an update. Â Our sons were returned to us on Tuesday/Wednesday in the children’s court/DCF Â with adjudication withheld. Â However the criminal prosecutor is not dropping the charges as of today. Â We have to appear in the criminal court on June 11th to put in our plea. Â I would love to speak to someone however due to my job (which is still on the line) Â I don’t know if it will make it better or worse. Â I am a state and county employee with the school system and I was made to sign a paper stating I would not speak with teachers parents or students regarding the matter.

That being said, it is possible this mom will never talk publicly about this case. Even so, WE should talk about it. It is time to rein in the power of the state to turn parents into criminals simply because they are imperfect.

Perfection is impossible in this world, and if the government is allowed to hound a family whose plans got mildly screwed up, it can hound every single one of us.

I will keep you posted if the mom tells me more, including where the kids were taken for that month. – L. 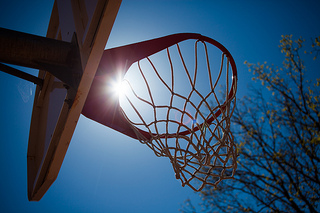 Why is it “negligence” if parents are late getting home one afternoon?

176 Responses to Boy, 11, Plays Basketball in Own Yard as He Awaits Delayed Parents. Cops Take Him & Brother Away for a Month