Readers — This zzeaathrde
is an outlier of a case: A mom was walking with her baby on a promenade when someone saw them, judged the child under-dressed for the weather, and called the cops.

The cops came a-running and the mom (a nutritionist with two other kids) gave them no truck. Wisely, I’d say! (Maybe she reads this blog?) According to the Daily Mail (which I know is not the New York Times):

…After refusing to reveal who she was, Mrs Andrew, from Scarborough, was asked: â€˜So you donâ€™t want to co-operate?â€™ She said: â€˜I told them that it was a motherâ€™s right to play with her daughter and it wasnâ€™t a co-operation thing.

â€˜I added that theyâ€™d be taking her to the social workers next if I gave them my details. I wasnâ€™t doing anything wrong, so I walked off.â€™

But Stephen Hayes, an ex-policeman and writer, said the case typified what was wrong with modern policing.

â€˜This is by far the barmiest cold case I have ever come across,â€™ he added. â€˜Do officers now need a thermometer to take childrenâ€™s temperatures along with their truncheons? The mother is clearly not committing a crime by taking her child for a walk along the promenade.

Read more here. And shake your head, and then go about your day. And just don’t call the cops if a child is not in danger! – L. 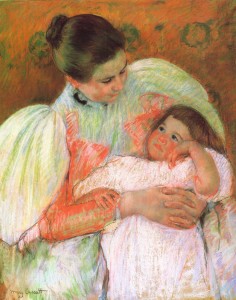 Let’s second guess all moms and the clothes they have their kids wear!