Readers — On Tuesday a New Jersey state appeals court ruled that a mom who let her 19-month-old wait in the car for 5 to 10 minutes was guilty of abuse. According to this kastiabyaf
story by Salvador Rizzo in the Star-Ledger:

“A parent invites substantial peril when leaving a child of such tender years alone in a motor vehicle that is out of the parent’s sight, no matter how briefly,” Judge Clarkson Fisher Jr. wrote for the three-judge panel.

He cited the risk of “car theft or kidnapping” and the possibility that “on a hot day, the temperature inside a motor vehicle can quickly spike to dangerously high levels, just as it may rapidly and precipitously dip on a cold night.”

As far as I can tell, the judge did not give any statistics. How could he? Had he or his fellow judges bothered to look at the facts (or remember their own childhoods, when most of us waited in cars), they would have realized the mom had made a completely rational, safe decision based on reality, not delusion.

Let’s consider some facts. Every year, more than 1200 children under age 15 are killed in car accidents. Meantime, about 50 are kidnapped and murdered by strangers (generally not after being snatched from vehicles), and about 35-40 die of overheating in cars, the vast majority after having been forgotten there all day, NOT after waiting out a 10-minute errand.

So as David DeLugas, executive director of the National Association of Parents points out: a child is actually far more safe in car that is NOT MOVING than one that IS.

Of course it would make no sense to arrest any parent who drives a kid anywhere. In fact, it would be nuts! Sure there’s a risk whenever we drive our kids, but it’s small enough that it’s one we rationally take.

So shouldn’t we be allowed to take the even TINIER risk of letting them wait in the car during an errand?

Ernest Landante, a spokesman for the Department of Children and Families, welcomed the court’s ruling …“Leaving a child alone in a vehicle – even for just a minute – is a bad idea,” Landante said. “Left unattended, a child in a vehicle is vulnerable to abduction and dehydration.”

Dehydration? Over the course of one minute? Can we please base our laws on something remotely resembling earth-bound reality?

The ruling, which can be applied to similar cases from now on, does not specify the age at which it no longer becomes negligent to leave a child in a car. Anyone under 18 is protected by the state child abuse law, but Fisher’s ruling also speaks of the “tender” age of [the defendant] Eleanor’s child.

So, considering the court has ruled that basically anyone under 18 is in danger even for a single MINUTE in a parked car, are we ready to do something about it, and bring attention to the cruelty of treating normal, loving parents like child abusing monsters? If so, would anyone consider joining me for a morning in New Jersey when we’d let our kids wait in the car for 10 minutes? Let me know! – L. 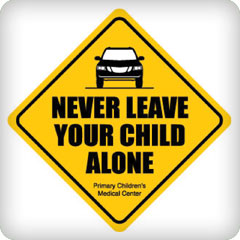 Never? Never ever ever? Even if I rationally, lovingly decide it’s safe?

118 Responses to Letting Your Child Wait in Car is Abuse or Neglect, New Jersey Court Rules