But if we WEREN’T spending so much time scrutinizing them — if we gave them decent dollop of old-fashioned, unsupervised time — we would see far fewer of those nervewracking, “teachable” moments, and hence not feel the need to supervise even more.

Which brings me to this wonderful piece by Angela Hanson, whose book “Balanced and Barefoot: How Unrestricted Outdoor Play Makes for Strong, Confident, and Capable Children,â€ I eagerly await this spring.

This piece ran in the Washington Post, presented by Valerie Strauss:

WHY ADULTS HAVE TO STOP TRYING SO DARN HARD TO CONTROL HOW CHILDREN PLAY, by Angela Hanson

â€œCut it out!â€ a little girl screams at the top of her lungs.

I look over in the far corner of the woods to see a small group of girls holding hands and forming what looks to be a wall in front of a teepee they just created. A little boy stands in front of them with a face that is beet red. He is shaking from head to toe.

â€œI will NOT!â€ he yells back. â€œYou have to let me play! That is the rules!â€ He gets dangerously close to them.

The adults observing the children look over at me with worried looks. I instruct them to observe but stay close and hidden among the trees. Secretly, Iâ€™m wondering if we should intervene now, but something tells me to wait. The little boy reaches up and tears down a piece of their tepee. â€œStop it!â€ one of the girls yells. They donâ€™t back down. A few more girls come and form a wall with them. The little boy suddenly reaches into their tepee and grabs the â€œjewelsâ€ they have hidden in there and takes off running.

The girls let go of each otherâ€™s hands and start chasing after him. They run around and around the trees in hot pursuit of the little boy. He finally comes to a stop and turns to face them. He holds out his hand and says, â€œFINE! Have them!â€ He returns the stolen jewels, stomps off, and finally sits down in front of an old oak tree â€“ sulking. The girls resume playing â€œhouseâ€ in their tepee.

Not even two minutes pass before one of the girls from the tepee group walks over to where the boy is sitting. She does something that surprises every adult watching. She sits down beside him. She looks him in the eye and starts talking in a quiet voice. He begins to raise his voice again. She patiently puts her hand up and waits for him to stop shouting. He becomes silent. A few minutes later, they get up. She reaches for his hand and leads him over to the group of girls at the tepee. He says something to them and they invite him to play.

What if the adults watching had intervened right away? What if we had jumped in as soon as there was a sign of conflict? We could have said, â€œBe nice girls. Let him play.â€ Or told the boy to stop yelling, explaining to him that this isnâ€™t the best way to be included. But what would that have accomplished?

In minutes these children learned important life lessons â€“ social emotional skills that are excruciatingly hard to try and teach children. Through this real life experience, they learned how to stand up for themselves, how to work through anger and frustration, and most importantly â€“ they learned empathy.

You canâ€™t role-play empathy! Or lecture children to death on how important it is to include other children. Children need to learn these things through practice. LOTS of it!

My heart is beating fast: She is so right! It’s not that Angela is saying don’t teach empathy. She’s saying that learning-by-doing is the best way to learn anything. Which we all knew, but sometimes forget — especially when we’re right there, ready to “teach.” – L. 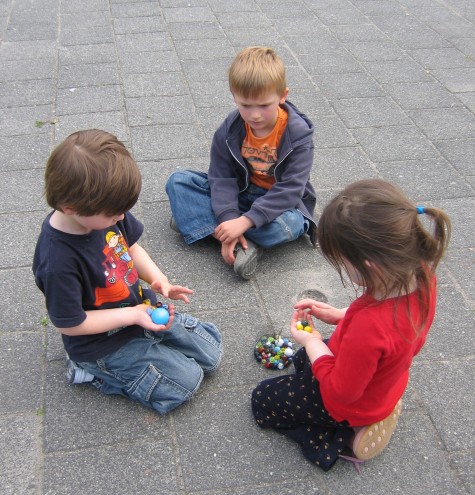 First I go, then you go, then we ignore Charlie. Okay?