No matter how you feel about gun control, this case is disturbing: A high school student who made an anti-gun-control video for class has been ordered to undergo a 5-hour psychiatric evaluation.

Frank Harvey, a senior at Manville High School in New Jersey, says he did the project for a college readiness class last year. As he ssbnadskkb
told New Jersey News 12, “It was assigned by the teacher.” The teacher now says she cannot recall assigning it.

His video featured news stories of people who had used guns to fend off home invasions, and some political cartoons that lampooned gun control. Frankly, it sounds pretty standard for a school project: Make a persuasive video about a controversial topic.

But when it was found on a thumb drive he left in the school library, the school summoned the police, who questioned Harvey and declined to arrest him. Yay.

That didn’t stop the school district from ordering the psych evaluation, however. Harvey is not allowed back in school until he takes it.
Â .
So…he’s not going back. It sounds like a zero tolerance stand-off: Zero tolerance for anything gun-related versus zero tolerance for an assumption of guilt.
.
The district claims Harvey is mis-characterizing what happened, but declined to comment, citing privacy laws.
Â .
As for Harvey, he told News12, Â “I’ve never been a violent person. I’ve never had detention in my life.”
.

His mother added, “I am not taking him for a psychological evaluation because this teacher is lying and won’t own up to what she did.”

Instead, Harvey will take his GED.

Let’s hope he doesn’t have to study anything about freedom of speech. Because he’ll be sorely confused. 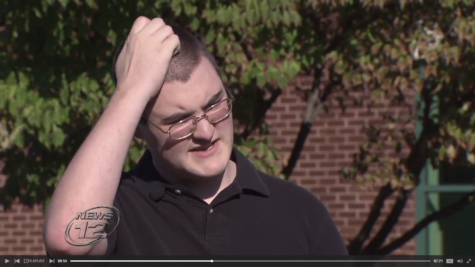 Frank Harvey can’t figure out why school is acting like he’s a ticking time bomb.

Grieving Mom Warns: “This Could Happen to Any Family with a 300-Pound Pet Python”
Trying to Close the Achievement Gap, We Have Created a “Play Gap”