This Saturday will be our sixth annual Take Our Children to the Park…and Leave Them There Day. That means I have six other blog posts explaining it. Allow me the favor of reprinting one of them, here:

Yes nhyzdtzstn
folks, this Saturday is international Take Our Children to the Parkâ€¦and Leave Them There Day, the Free-Range holiday thatâ€™s celebrated just the way it sounds: We all take our kids to our local park and, if theyâ€™re 7 or 8 or older, leave them there for a while, starting at 10 a.m.Â That way, they meet up with other kids from the neighborhood â€” even ones that go to different schools.

After we wave goodbye, the kids will have to come up with something to do without an adult directing them. Â This may be a completely novel experience. But by the time theyâ€™re done Â â€” half an hour, or even half a day later â€” chances are theyâ€™ll want to do this amazingly fun thing called “playing” again. So Sunday becomes unofficialÂ â€œOur kids are going to the park on their own day,â€Â  as do Â most days thereafter. Suddenly, the empty parks are full of kids again!

If youâ€™ve got younger children, you can participate, too. Just sit on the bench while they play. Your presence creates the kind of community that reassures the parents leaving their older kids there.

This simple, old-fashioned idea will, of course, seem radical to some. They will say they loved playing on their own when they were kids, but now itâ€™s too dangerous. Please show them this Pew study on gun violenceÂ that states: â€œFirearm homicide rates in the late 2000s were equal to those not seen since the early 1960s.â€ Â Thatâ€™s right â€” gun crime is down to the level it was BEFORE COLOR TV.

And yet: 1 in 4 kids, ages 6 to 12, NEVER goes outside without a parent.Â The outdoors is treated like supervised yard time at prison.

Fight the misplaced fear that has kept kids indoors or only in supervised programs.Â Go forth to Facebook and Twitter and the PTA to spread the word about Take Our Children to the Parkâ€¦ and Leave Them There Day! 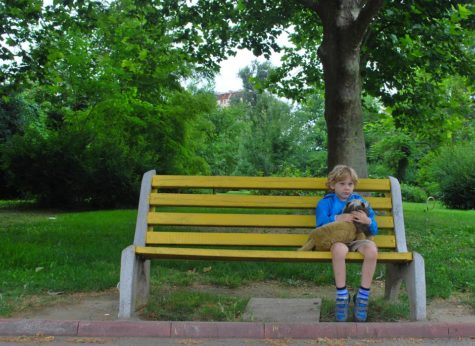 Please do not let this be the official photo for “Take Our Children to the Park..and Leave Them There Day.”Â

It Used to be Lonely for Kids INSIDE. Now It’s the Reverse
Graduates Asked to “Mime” Throwing Caps in Air, for Safety’s Sake

23 Responses to Take Our Children To the Park…and Leave Them There Day: THIS SATURDAY, MAY 21!