Hi iftstrnfyh
Readers — Mothers bringing their older sons into the ladies room seems to be more common these days, unless maybe I’m just more aware of it because of this blog and my own take on things. Is it on the rise, in tandem with worst-first thinking? Really like to hear your take on it. – Â L.Â

Dear Free-Range Kids: I recently visited New York City for the first time during the holidays. I lived downtown Chicago for 8 years so I am used to participating in cautious and seeing cautious behavior but this one was new — something I have NEVER seen before.

We were in the mall area under Rockefeller Center and I needed to take my 4 year old daughter to the bathroom. She still isn’t a pro at doing the whole bathroom thing by herself but she is well on her way.

Anyway, as we waited in line a woman had her JUNIOR HIGH age son in line for the Women’s with her. He had pulled his coat up over his head (no hood so it was obvious he was hiding — either hiding the fact that he wasn’t a girl or hiding from embarrassment of his MOMMY making him use the Women’s I have no idea).

A female security guard approached them and the mother just lit into her about how she was doing this and how “these are the times in which we live.” At this point even my 4-year-old was blown away by seeing a boy that old in the women’s bathroom — she sees little ones all the time, obviously.

As the mother was yelling at the security guard another mother with a junior high aged son came out of the bathroom basically in agreement and full of support for the first mother. The security guard rolls her eyes and walks away.

What really took the cake was when the mother in line and her son made their way into the bathroom and he goes into his own stall she was yelling in a panicked voice “You’ll be okay, Jordan, I’m right here!” Did she seriously expect to share a stall with him?

So my mind was officially blown. I see the stories like this on this site but had never actually witnessed it.

After we left the bathroom, I did the real “classy” thing and told my junior-high-aged niece who was waiting for us all about it and warned her that the future MEN of her era were being raised in this manner and I really felt for her when the time came for her to date or get married. But it all boils down to the same thing — not trusting men, all men are bad, suspicious and going to molest your sons in the bathroom. There is no one trustworthy in a bathroom that has 10+ stalls, no one who would help your son in a worst case scenario, and worst of all your son has no common sense to help himself. Because, lady, that is how you’re raising him.

Lenore here again: As some of you may know, I did a reality TV show with Discovery/TLC International last year called “World’s Worst Mom,” (‘Bubble Wrap Kids” in Canada) wherein I visited a one very overprotective family each week. I was like the Supernanny, except instead of imposing discipline (not my forte!), I took the kids away from the parents for four afternoons in a row and had them do things like play in the woods, or run a paper route, or — a couple of times — actually go into the bathroom BY THEMSELVES. I’m talking about kids aged 9 and up.

Well one mom had never let her 13-year-old son go to the men’s room. She always took him into the ladies room, and he was mortified. So that was an activity I had him do: Okay, you’re at the rollerskating rink — go to the john. And after I showed the mom a video of him going through the men’s room door and then coming out again — un-raped! Un-murdered! Head still attached to his neck! — it was like she came out of a trance. Instead of being angry with me, she was almost bewildered: Had she really ever thought it was such a big deal? She could not even REMEMBER why she’d been so afraid.

That’s why what I urge everyone to do (and what I’ve just starting to give workshops on, even) is this: Take the leap. LET your kids do something they know they’re ready for that, in your heart of hearts, you suspect they’re ready for, too. When you gather the courage to let go JUST ONCE, the results can change you forever — because your child changes forever. Fear is replaced by pride and joy. Pretty heady! (And that’s not just a bathroom pun.) – L.Â 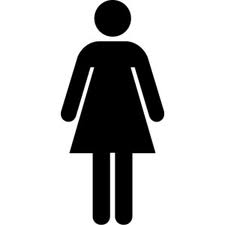 What age should moms stop dragging their boys into the ladies’ room?

You Can Have My Lego Gun When You Pry It from My Cold, Dead Fingers
School: “When Fire Alarm Rings, Lock Yourselves In — It Could REALLY be a Shooter”

220 Responses to The Mom, Her Junior High Son & The Ladies’ Bathroom