Readers yyrfddestt
— We’ve been chronicling the most appalling reactions to the Sandy Hook shooting, but this drill, atÂ Carl Ben Eielson Middle SchoolÂ in Fargo, ND, was actually in place BEFORE Newtown! In fact, the school postponed it till about a week ago: A drill whereby the fire alarm was sounded and teachers were instructed to KEEP THE KIDS INSIDE THE CLASSROOMS and barricade the doors because it COULD be an “intruder,” fiendishly trying to lure children outside, where he could shoot them. Â Herewith,Â I give you the article and let the mom who sent it in take over the fulminating:

Dear Free-Range Kids: I have so much to say but no words. I thought we were keeping the stupid hysteria at bay here in North Dakota, but this takes the cake: “…students and staff are trained not to leave classrooms when fire alarms go off unless they smell smoke, because a real intruder could pull the fire alarm to try to lure people out of classrooms.”

Really? I mean — really? Like this has actually happened A LOT (rather than one time, in 1998), someone pulled the fire alarm “to try to lure people out of classrooms” and then… what? Seriously, fifteen years ago, ONE time, ONE school out of tens of thousands and we’re going to start pushing desks up against doors instead of finding an exit??

We’re teaching our children that a FIRE ALARM isn’t an important enough situation, but that if you venture out in an orderly fashion without actually, you know, smelling a fire, that YOU ARE IN STRANGER DANGER.

What other scenarios play through these youngsters’ heads? If a fire alarm goes off anywhere else — a mall, a church, the grocery store — are they going to panic and hide? Run? Because they’ll be more concerned about someone coming to harm them than actually getting to safety?

I just hope they never have to actually use the fire alarm for a fire, as I fear some children may never get out because of the Intruder Alert Syndrome. Because obviously, NOTHING ever burns at a school. 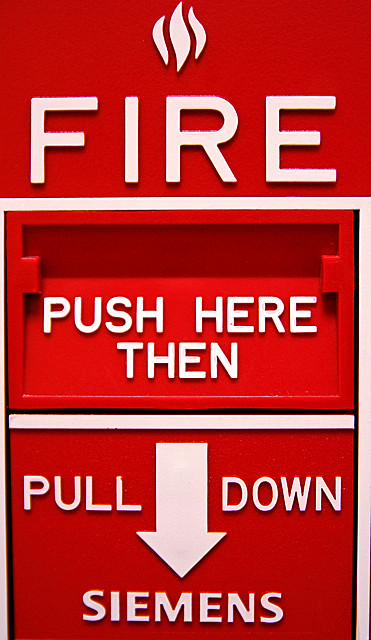 Remember: A fire alarm means STRANGE DANGER, so stay inside!

104 Responses to School: “When Fire Alarm Rings, Lock Yourselves In — It Could REALLY be a Shooter”