The idea of arresting esassfsnty
parents who let their kids play outside unsupervised just took another hit. Â Yoo-hoo, CPS! According to The Globe and Mail:

A new Canadian study suggests there could be added health benefits for kids who play outdoors on their own or with their friends.

Researchers analyzed data from a survey of more than 1,000 parents of Grade 5 and 6 students at 16 public schools across Toronto.

Kids had to wear an activity measurement unit for seven days and parents were asked to self-report how often they allowed their kids to go out on their own….Kids who were allowed some time out to explore on their own or with friends were more physically active than kids who were always supervised.

Of course, about a third of the parents studied never let their kids go outside unsupervised at all. And only 16% say they “often” let their kids — 5th and 6th graders — roam on their own. And yet, says the study’s lead author, Ryerson University’s Raktim Mitra:

All of the findings tell parents one thing, says Mitra: â€œInstead of constantly supervising your children, give your kids a chance to explore their neighbourhoods on their own. If you do that, your child can reap immense physical, social and mental health benefits down the road.â€

In other words, Free-Range your kids with abandon!

Uh…poor choice of words. Just Free-Range your kids knowing that you are doing something wise, old-fashioned and healthy. And it is NOT abandonment. – L. 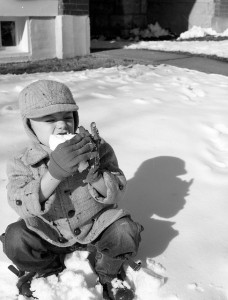 Snow day! Go out and play!

My Daughter, 10, Wondered Why the Boy Walking Her Home Wanted to Go In The Alley
The Meitivs are Restless