After the yhaisbktbk
NY Times did its story on how easy it is particularly for poor people to have their children taken away for trivial reasons, including normal parenting blips and/or the desire to give the kids some freedom that a bureaucrat deems too much too soon, the New School’s Center for New York Affairs did a Q and A on the topic. They spoke with Joyce McMillan, whose Child Welfare Organizing Project reminds me of Diane Redleaf’s organization in Chicago, the Family Defense Center. Both are adv0cating for justice for families in the child welfare system:

Last week, the Center for New York City Affairs spotlighted recent dramatic surges in reports concerning child safety – which has led to more investigations of child safety, more families with child welfare cases, and more child removals to foster care. (See “ACS in Overdrive.”)  A day later, our findings were echoed in a major New York Times piece focusing on how foster care removals punish the parenting decisions of low-income black and Hispanic women. This was the latest in a number of recent articles and reports illuminating the varying ways in which being a poor mother of color in New York City leads to your parenting being closely scrutinized—consider it the female counterpart to stop and frisk. (See the “Related Work” we cite at the end of this post.)

For perspective, Kendra Hurley, a senior editor at the Center for New York City Affairs, turned to Joyce McMillan, director of programming and a parent advocate at the Child Welfare Organizing Project, which for years has spoken out about what they see as the inherent racism and destructiveness in child welfare systems. Here are excerpts from that interview.

You’ve contended for years that the child welfare system damages families of color. Now a New York Times article has echoed that. What was your reaction?

It was just like the Yankees had won! I’m just so excited about this moment. I think right now with movements like Black Lives Matter and the effort to close the City’s correctional facility on Rikers Island there’s a shift in America. The momentum from one movement can push the momentum of another. It’s a pivotal time in America and it’s a pivotal time in child welfare.

I think the shift started some time ago. It may or may not have begun with Michelle Alexander, author of the 2010 book The New Jim Crow: Mass Incarceration in the Age of Colorblindness, which argues that mass incarceration is designed to keep black people disenfranchised. But that book really made people take notice. Advocates of a number of movements were able to identify with that book and make parallels with the movements they were pushing.

When I read the book, it immediately spoke to my soul. I saw the parallels between Jim Crow and mass incarceration and also foster care. Everything in these systems tends to separate and break down families—and the family is the core of a person becoming who they are.

When it comes to the child welfare system, we spend money to take children out of homes and care of parents who the system deems unsafe. In doing so, children are made to transfer schools, doctors and everything they have been familiar with for a lifetime. All the research shows that most children in foster care transfer to multiple different foster homes during their time in the foster care system, compounding the emotional toll and trauma this disruption causes. Research also shows that many children are mistreated in the very homes they are placed in during this effort to keep them safe.

It seems to me that rather than fund a system that we know is harmful to children, families, and communities, we could continue to shift the spending to provide supports to all families, regardless of race and class, to ensure that families receive the supports they need to keep their children safe, healthy, and thriving at home.

What parts of that article were you most pleased to see discussed?

How black parents are being held to a level our white counterparts are not. For normal mishaps of taking care of a child, for a black family a criminal action gets added to it. In The New York Times story, a child wandered out of the house across the street to a place that was familiar to her, her grandmother’s house. Is that a good thing? Absolutely not. But how many white women are in a shopping mall and they don’t have their child’s hand and the child wanders off, and no one calls child welfare, no one calls the police about it? That’s because there is a loud but silent narrative that says that mom is a good mom, something just went wrong in this one moment, but she’s more than capable of taking care of this child.

But if a black woman was in this same mall, and this same thing happened, someone would say, ‘She doesn’t know how to take care of her kids,’ and the outcome would be completely different.

What are some of the collateral consequences of being investigated by child welfare services?

You live with the trauma of the investigation and fear of removal. And that investigation changes the way a child sees her parents. Now you have to see your mom having to be nice to the people surveilling her and hold her head down, to not speak with a tone of frustration, not challenge.

If your case is founded—even if your children are not placed in foster care–it limits your employment.  Until your youngest child is 28, you can’t work with children. You can’t be a school crossing guard. You can’t be a cafeteria worker. These are minimum-paying jobs because a lot of people in the communities that are affected by child welfare don’t have degrees. They can only obtain minimal paying jobs and now many of these jobs are out of reach for them as well because of this case. So that removes many options to support your family and that puts your family at higher risk for recidivism.

When you have a mother who has a child who is in foster care or has been adopted, if she has another child, that child is at a greater risk of removal simply because her name is in the State Central Registry.

More generally, living with constant scrutiny prevents children from flourishing and reaching their full potential and causes many parents of color to raise their children out of fear not out of love. They love their children, but they know that to parent out of love is a luxury. That luxury means I can provide you room to make a mistake and we can rebound from that mistake. But that’s not true in families of color. One mistake can cost us everything so we condition our children to be afraid of the world.

Parents get conditioned to be afraid of the world, too. This must end. To err is human, so if the government leaves only PERFECT parents alone it is free to investigate us all. Read the rest here: 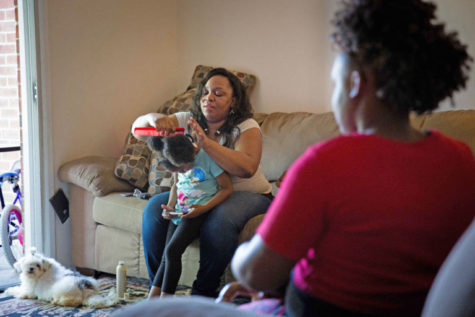 A family highlighted in the New York Times article on how easy it is for caseworkers to insert themselves into decent, but poor, families.  Photo by Kevin Hagen.

San Francisco Getting Rid of Sand at its Playgrounds
Am I “Making It Easier for Pedo Abductors”?

59 Responses to How Easy It Is to Have Your Children Taken Away for Trivial Reasons, Part 2