This New nbdnsbfezy
York Times piece on the new “Jane Crow” — poor black and Hispanic moms whose kids are taken away for trivial or even non-existent reasons simply because it’s assumed they are lazy, bad parents — will make you scream.

It’ll also make you see how the Free-Range Kids fight is for ALL parents. We fight for the right of parents to be imperfect without this being considered a CRIME. Kids don’t need perfect parents. And they certainly don’t need their parents arrested or harassed for not conforming to the June Cleaver (who was fictional!) extreme.

Maisha Joefield thought she was getting by pretty well as a young single mother in Brooklyn, splurging on her daughter, Deja, even though money was tight. When Deja was a baby, she bought her Luvs instead of generic diapers when she could. When her daughter got a little older, Ms. Joefield outfitted the bedroom in their apartment with a princess bed for Deja, while she slept on a pullout couch.

She had family around, too. Though she had broken up with Dejaâ€™s father, they spent holidays and vacations together for Dejaâ€™s sake. Ms. Joefieldâ€™s grandmother lived across the street, and Deja knew she could always go to her great-grandmotherâ€™s apartment in an emergency.

One night, exhausted, Ms. Joefield put Deja to bed, and plopped into a bath with her headphones on.

â€œBy the time I come out, Iâ€™m looking, I donâ€™t see my child,â€ said Ms. Joefield, who began frantically searching the building. Deja, who was 5, had indeed headed for the grandmotherâ€™s house when she couldnâ€™t find her mother, but the next thing Ms. Joefield knew, it was a police matter.

â€œIâ€™m thinking, Iâ€™ll explain to them what happened, and Iâ€™ll get my child,â€ Ms. Joefield said.

But no. The cops took her child and the Administration for Children’s Services put her in foster care. Then the cops charged Joefiled with child endangerment.

Horrifying. And reminiscent of other cases we’ve long discussed here, like this one, where a boy with autism wandered off and Â his parents were cited for potential neglect. Or this one , where a 3-year-old’s nighttime adventure got the mom got a 20-day sentence. OrÂ this caseÂ , where once again a tot wandered off and mom got charged.

The Times piece went on:

She was caught up in what lawyers and others who represent families say is a troubling and longstanding phenomenon: the power of Childrenâ€™s Services to take children from their parents on the grounds that the childâ€™s safety is at risk, even with scant evidence….

In interviews, dozens of lawyers working on these cases say the removals punish parentsÂ who have few resources. Their clients are predominantly poor black and Hispanic women, they say, and the criminalization of their parenting choices has led some to nickname the practice: Jane Crow.

The article quotes a public defender who said that in a more affluent community, “your kidâ€™s found outside looking for you because youâ€™re in the bathtub, itâ€™s â€˜Oh, my Godâ€™â€ â€” a wacky story.

One impact Free-Range Kids has had has been in making the public aware of how easy it is for the government to insert itself into family issues. Our middle class examples, like the Meitivs, investigated twice for letting their kids 10 and 6 walk home from the park, or Maria Hasankolli, handcuffed and thrown into a squad car when she overslept and her 8-year-old walked himself to school, or Julie Koehler,Â a suburban Chicago mom whose kids had to be examined by a doctor for signs of sexual abuse after she let them wait in the car for three minutes while she got a Starbucks (after all, if she’s that “negligent” she may well be abusive, too) — these stories have shocked and angered Americans who might not have heard of this same problem, so widespread, in poorer communities.

Free-Range Kids is fighting for the right of ALL parents not to be held to impossible standards, standards that even the Prime Minister of Britain failed to live up to the day he and his wife left their child at a pub, each assuming she was with the other parent.

To err is human, and parents with less money have even fewer resources to rise to superhuman parenting standards. When we pretend perfection is required, we create a police state for parents:

Vivek Sankaran, a professor at the University of Michigan Law School,Â hasÂ examined short-term placements of children in foster care. He learned that in the 2013 federal fiscal year, 25,000 children nationwide were in foster care for 30 days or fewer, about 10 percent of the total removals.

â€œWeâ€™ve inflicted the most devastating remedy we have on these families, then weâ€™re basically saying, within a month, â€˜Sorry, our mistake,â€™â€ he said. â€œAnd these families are left to deal with the consequences.â€

Â Our fight, then, is to reverse the idea that blips are evidence of bad parenting, and that any unsupervised moment is tantamount to abuse. We fight to enlighten cops, social workers, the courts and the 911-dialers to all stop unnecessary interventions before they start. 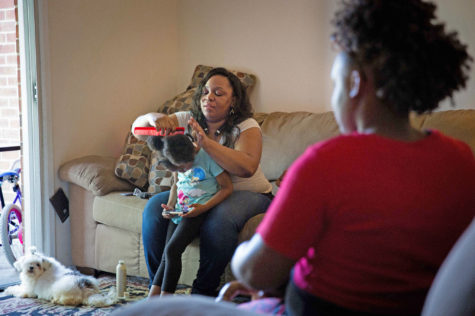 Maisha Joefield and child, in New York Times photo by Kevin Hagen. When Joefields’s daughter unexpectedly let herself out of the home one night, Joefield was charged with neglect and her child was sent to foster care.