Voila znnhtababs
a Facebook thread from Cherry Hill, NJ. Names removed to protect them from being kidnapped! Or whatever. (You just can’t be too safe!) Most upsetting to me is the idea that if a child is walking home, something is wrong and the authorities should become involved. I like how Ed, towards the end, manages to shift the focus. (Boldface is mine):

ORIGINAL POSTER: Hello everyone Iâ€™m not sure how to deal with a situation that I have encountered twice so far this school year,, today as I was waiting for the light on Morris and Springdale around 3:45 waiting to turn left I noticed an elementary age boy turning the corner and walking alone up the busy road of Springdale, this scared me to death!! a million things went through my head if something was to happen to him with so many cars driving by,,,, just imagine!!!! So I put my hazard lights on and called to police and followed him slowly till I started to talk to him through the car window to stall him till police would arrive,, and so they did and then took over the matter..

A 7 year old vulnerable boy walking alone along Springdale rd,, where are the parents? School? I don’t get it?!?!?! So dangerous and so many crazy people out there!!!!! I am bothered!!!!!!

SUE: I think I saw this near the K___ residence. What happened? Did the police drive him home? IMO, I think the town should be responsible for him until he gets home (bus) as he is on a MAJOR road. <can’t imagine your gut when you went thru this – thank you for caring!>

ELLEN: Sad/scary situation. You totally did the right thing calling the police. Was he walking home from elementary school?

ORIGINAL POSTER: The officer was like ‘I think it’s ok he walking home,,,’ I was like I’m sorry not on a busy road! He said that he was gonna drive him home or back to the school.

Yes, he said he lives near wawa but couldn’t remember the street name,,

ELLEN: Near wawa…..there isnt even a sidewalk there….so scary.

GIGI: Â If there is no side walk. I thought the rule is he would need to be bused.

ORIGINAL POSTER: Â No none!!

LISA: I saw this and wondered what was going on. Good for you! How scary for that little boy! I don’t want to judge the parents bc we don’t know why he’s walking alone. But, they should reach out to the school for safety reasons.

ADRIENNE: It could be reportable. I hope the police investigated and called DYFS if necessary. Poor kid!

ORIGINAL POSTER: Â Idk what to say anymore!! Poor kids out there!!!

ERIN: He should he dropped off near his house. There are plenty of busses that go down Springdale.

CLAUDIA: It’s so crazy how times have changed. I talk to my husband about this all the time. My brother and I would leave the house on the weekend and be all over the neighborhood- even busy streets. We’d walk to Cumberland Farms (anyone remember those?) and it was on a highway. I was 6 and my brother was 8. That’s not to say that it was a good idea… My son is 7 and I don’t let him play in our front yard unless I’m out there lol. I can’t tell if I’m being safe or a (s)mother. Maybe this kids parents are from a place where at 7 you have grown up responsibilities- look at the kid in the picture (keep in mind I don’t let my son use the toaster haha)

HANNAH: The school is aware of the situation and they are taking care if it.

ED: Kids walk home and to other places alone often. The police didn’t seem to have an issue with it. What was pretty scary is some strange person slowly driving in a car down Springdale following a young kid walking alone.Its all about perspective.

ERIN: Â Sorry…in todays day….it is very unusual to see a young child walking alone on a busy road! And I think it is wonderful that someone cared enough to stop and ask the child if they were okay!!! Most people would turn the other way because they are too busy and in a hurry!!

ED: Which brings me to my next point….why are so many main roads here (like Springdale) sidewalk free?Walking isn’t the issue…poor planning in the face of development is.

ED: Maybe you feel its unusual in this area….but every day I see kids travelling alongside much busier roads. The difference is they have sidewalks,crosswalks,and traffic signals.

ELLEN: I don’t understand the lack of sidewalks. There are schools with no sidewalk.

BARB: Â With all the shopping center development, playgrounds, baseball fields … there should be sidewalks on Springdale and Evesham. Not sure why the township didn’t make provisions for this when they developed all the farm land. 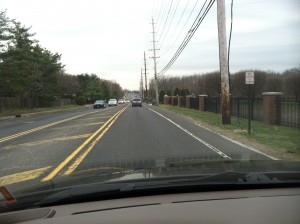 This is the street!

117 Responses to “I Saw a 7-year-old Walking Home and Felt So Scared for Him!” — Mom on Facebook