On Nov. 18, Maria Hasankolli of Wallingford, CT, came home in the early hours of the morning after visiting a relative at the hospital. She overslept while her 8-year-old stepson got himself ready for school — and missed his bus. The boy, Lucan, decided to walk to school on his own, two miles away, and was about halfway there when a business owner spotted him and called the cops. The cops drove Lucan to school, then went to his home, woke zzkdyihiib
Hasankolli and clapped her into handcuffs.

She was driven to the police precinct, had her mug shot taken, and wasÂ given a $2500 bond. Her court date is this Wednesday. The charge?

Risk of injury to a minor. AsÂ WFSB reports:

A Wallingford woman has been arrested after police found her 8-year-old stepson walking to school by himself.

The elementary school student missed his school bus and decided to walk about two miles to school.

A business owner on North Plains Industrial Road saw the child walking by himself and called police.

When they went to the childâ€™s house, they found his step mother, 38-year-old Maria Hasankolli, sleeping.

“She had to be awakened and the officer asked her where the child was. She said he’s downstairs and they went downstairs and she couldn’t find him and said he’s not there,â€ said Wallingford Police Lt. Cheryl Bradley.

Asleep in the morning! How dare she?

“I wasn’t arrested for letting my son walk to school. I got arrested for not being awake,” Â the stay-at-home mom told me in a phone interview. As one of the cops was taking her in, she recalls, “He said, ‘It’s despicable that you’re sleeping while your child needs you to get ready for school.'”

Um…is it a crime not to cater to a child capable of getting himself dressed and fed?

Does this officer know that just a couple of generations ago a child of eight might not only have been expected to get himself up, but might have gone out, pre-dawn, without a parent, to deliver newspapers? Hasankolli herself did daily that when her brother was eight and she was seven. “We delivered 320 papers!”

Now she is a mom of six: three children of her own and three step children. The story gets a little grimier when the TV reporter dredges up past calls to Child Protective Services — calls that are all too common in custody cases (Hasankolli’s husband has sole custody of his kids). A horrific abuse charge mentioned in the WFSB news report — of the parents duct taping their child — was found unsubstantiated. But heck, why not bring it up? It sure sounds bad, as does the fact Hasankolli was found guilty of a felony a decade ago (for failure to appear in court after a fight with her sister).

“I never claimed to be perfect, nor have I stated that I’ve never made mistakes,” Hasankolli told me. But her Â past should be of no matter in this case. She was arrested for oversleeping.

When the cops picked up her son, they asked him why he was walking — as if that activity is so outlandish — and he replied, “Because my mom’s asleep and I missed the bus.” That’s the reason they came to her home with handcuffs.

“I asked him [one of the arresting officers] to show me something that said it was illegal for Lucan to be unsupervised in the morning and he just kept saying to me that, ‘He has to be 12 years old,'” says Hasankolli.

But the Connecticut law is this:

Any parent, guardian or person having custody or control, or providing supervision, of any child under the age of twelve years whoÂ knowingly leavesÂ such child unsupervised in a place of public accommodation or a motor vehicle for a period of time that presentsÂ a substantial riskÂ to the childâ€™s health or safety, shall be guilty of a class A misdemeanor.“

To me, that sounds as if a child has to have been deliberately left someplace bad, as opposed to simply experiencing a parental blip. And if “substantial risk” can encompass any time a child walks to school and a passerby thinks, “Oh! That’s dangerous!” then all bets are off. The “What if???” chorus wins. Parents can be arrested for trusting their kids, for letting them go outside before age 12, and for oversleeping.

Talk about a nightmare. – L 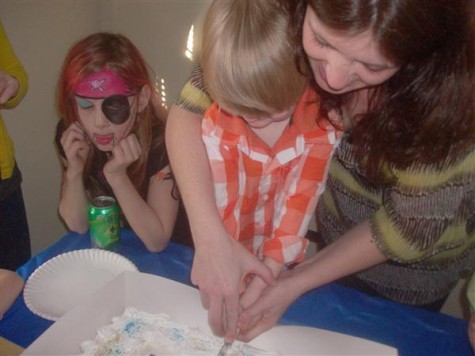 Maria with son Lucan.Â Make a wish…that your mom is not found guilty just for oversleeping!

Dear Abby: Do You Really Want to Validate a Mom’s Baby-Snatching Fears?
And Now a Note from Your Sponsor

191 Responses to Mom Handcuffed and Arrested for Oversleeping While Son, 8, Walked Self to School