Do we really have to re-surface every playground in America because they aren’t safe enough?

Tim Gill, author of the blog “Rethinking fdbiynbyea
Childhood,“Â  andÂ Bernard Spiegel, granddaddy of the idea of “beneficial risk,” and Jay Beckwith, the veneratedÂ playground guru, are just some of the big names in the “play” world alertingÂ us to potentially over-the-top new playground surface standards.

The American Society for Testing and Materials will vote on these standardsÂ as soon as March 4 — Wednesday! — and so we have to register our thoughts, very soon. Â The rationale is that new surfacing will cut down on head injuries. But from Britain (which often follows our lead), Gill isÂ begging us to debate the issue in public before deciding if such sweeping changes are really necessary.

The idea that suddenly we need to resurface all the playgrounds in America does strike me as strange. Children are not dying right and left on playgrounds. In fact, (here I’m quoting Gill):

“Accident figures from the CDC suggest that in the decade 1990-2000, there was on average a single child fatality each year as a result of falls in American public playgrounds. By contrast, almost 1100 child vehicle passengers under 15 died in a single year…[and] around 700 children under 14 drown each year…

Studies also show that playground accidents rarely result in permanent brain injury. A 2004 World Health Organization review quotes two relevant studies. One states that 1.7% of school playground equipment-related injuries were concussions, and another suggests that fewer than 1% of the injuries in US daycare centers were concussions from playground falls…These figures raise serious questions about whether, given the overall goal of tackling child injuries, scarce taxpayer dollars are best spent on resurfacing playgrounds.”

Two questions need to be answered: How much would the new surfacing cost to implement, and how cost-effective is it compared to other safety measures, like, say, hiring more park workers, so parents feel safe dropping their kids off? Or simply saving the funds for when and if we really need them?

I contacted the ASTM and got a letter back that said, “ASTM invites all interested parties to participate in the development of industry standards.”

SoÂ ifÂ you would like to ask the ASTM to rethink its new standards, or postpone its vote until more voices can be heard, you can drop a note to the men in charge: Harvey C Voris (hvoris@paramountfitness.com) and/or George Sushinky, Chairman of the ASTM Subcommittee on Playground Surfacing (gsushinsky@gmail.com). – L 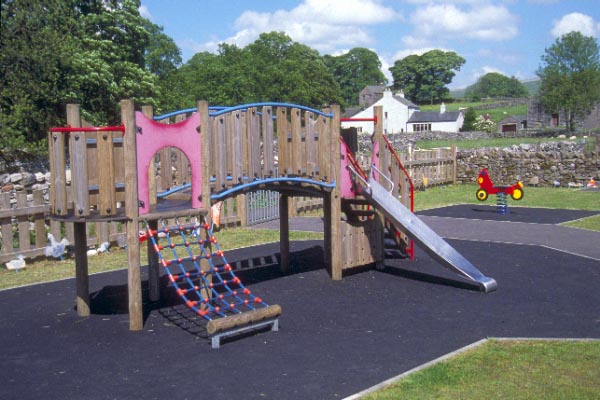 Missed It? Free-Range Kids and The Talk of the Town
“Best Places to Live,” says Sunday Times of London, are Free-Range Neighborhoods!

41 Responses to How Safe is Safe Enough for Playground Surfaces?