Come ndhnradiyy
Monday, a new issue of The New Yorker will be landing in the mailboxes of the diehards who still get hard copies of magazines.  So while this wonderful 90th Anniversary issue of the New Yorker is still current, allow me to excerpt a bit from the Talk of the Town piece I am saving forever. (Then again, I am saving all my New Yorkers forever. Doesn’t everyone? Aren’t you actually not ALLOWED to throw them out, like batteries?)

Recently, in Silver Spring, Maryland, drivers at a busy intersection witnessed a spectacle you don’t see much these days, outside of the “Hunger Games” franchise: two children, aged ten and six, walking alone. An onlooker alerted the police. The cops scooped up the kids, drove them home in a patrol car, and reprimanded their father, Alexander Meitiv, a physicist at the National Institutes of Health. Within an hour, five squad cars had arrived.

Meitiv insisted that he was not guilty of negligence. He’d dropped off the children at a nearby park, with the idea that they would walk home. He and his wife are devotees of Free-Range Kids, a movement committed to rolling back the excesses of the helicopter-parent era. (From the group’s Web site: “Fighting the belief that our children are in constant danger from creeps, kidnapping, germs, grades, flashers, frustration, failure, baby snatchers, bugs, bullies, men, sleepovers and/or the perils of a non-organic grape.”) The movement was founded by Lenore Skenazy, a former columnist for the News and for the New York Sun, who achieved mommy-blog infamy when, seven years ago, she wrote a column about letting her nine-year-old son, armed with a map and a MetroCard, find his way home from Bloomingdale’s. Skenazy published a book and now has a reality show, “World’s Worst Mom,” on the Discovery Life Channel. In it, she swoops into the homes of overprotective parents and persuades them to let their offspring perform such retro tasks as riding city buses alone and setting up a lemonade stand. “The kids are thrilled,” she said the other day at her family’s apartment, in Jackson Heights, Queens. “And the parents are happy you’ve replaced their dystopian horror story with reality.”

The Meitiv children own, but were not carrying, the I.D. cards that come with Skenazy’s book: “ ‘I am not lost! I’m a Free-Range Kid,’ ” Skenazy said, reading from a card. “ ‘The adults in my life know where I am.’ ” She added, “Unfortunately, it doesn’t come with the phone number of a lawyer.”

Skenazy is wispy, and had on big tortoiseshell eyeglasses. She and her husband and two sons moved to Queens from Murray Hill five years ago. A pan of brownies sat on the stove. “They said something I loved,” Skenazy went on, talking about the Meitivs. “They said they wanted to raise their kids the old-fashioned way.” She ran through a few statistics, emphasizing that children are safer today than they were a generation ago, in the carefree days before “To Catch a Predator.” “If you actually wanted your child to be kidnapped, how long would you have to keep him outside for him to be abducted by a stranger?” A week? She shook her head. “Seven hundred and fifty thousand years.” She derided the “back-door anti-feminism” of expecting mothers to monitor their children all the time.

She was interrupted by the appearance of two curly-headed teen-agers in snow gear. Skenazy introduced them: Giovanni, an Italian exchange student, and Izzy (short for Isaac)—the kid whose journey from Bloomingdale’s started everything.

Read the rest here.  And thank you, Lizzie Widdicombe! 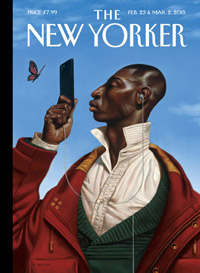 Welcome to my coffee table. Forever!

“Bring Back Wildhood” Great Ad from Go RVing !
How Safe is Safe Enough for Playground Surfaces?

9 Responses to Missed It? Free-Range Kids and The Talk of the Town