Mike Tang, the California chemist who got 56 dzikhdhfbt
days’ “hard labor” for making his 8-year-old son walk home at about 8 p.m. in the dark, just lost his appeal.

Tang had left his son outside a local grocery store as punishment for cutting corners on his homework. He told the boy he had to walk home. The child  had walked the route many times before. “I just wanted to reinforce that money is hard to earn and that, if he doesn’t do a good job at school, he could end up sleeping…[with] the homeless” outside grocery stores, Tang told Reason.tv (see below).

The jury found Tang guilty of neglect. At his appeal, he asked the Superior Court of California’s Riverside County Appellate Division to reverse his conviction, in part because California law criminalizes anyone who puts a child “in a situation where his or her person or health may be endangered.” May. That is such a vague and vast catch-all, Tang argued, that any parent could be arrested if “there was a crack in the sidewalk where the child could trip and fall.”
The appellate court, like our society, had no problem with such a demanding level of precaution, or with giving law enforcement, child protective services and the courts so much control over parents. Apparently the three judges, Raquel A. Marquez, Gloria Connor Trask and Dean Benjamini, could not accept that a child out on his own in the dark could be reasonably safe.
The area is not a high crime area, but both the jury and the appeals court found it sufficiently damning that Corona Police Officer Doug Doty, the cop who arrested Tang, testified that once he had made a DUI arrest in that location, and another time had encountered a violent homeless person there. (See yesterday’s post, regarding IHOSFO: It Happened Once, So Freak Out.)
Tang’s wonderful retort was that:

“To criminalize the action of allowing a minor to walk on a sidewalk because of one instance of one officer stopping a car for a DUI in the entire history of the sidewalk, since its construction, is patently absurd. That would imply that this stretch of sidewalk would be off-limits to minors from now until the foreseeable eternity, and any parent allowing their child to walk on this stretch of sidewalk amounts to criminal child endangerment, and that is also patently absurd.”

Absurd or not, Mike lost. It seems as if any parent who doesn’t immediately imagine the worst is considered uncaring, inhuman.
And guilty.
What can be done? David DeLugas is executive director of the National Association of Parents, a member-supported non-profit (I joined!) whose mission includes fighting for the rights of parents to raise their kids as they see fit, so long as not they’re harming the children. It was DeLugas who fought the charges against the mom vacationing in Rehoboth Beach, Delaware who’d been arrested for “endangering” her kids when she went to pick up dinner and they took their dog out for a walk. In Delaware, DeLugas points out, child endangerment charges kick in only when a child is “likely” to be hurt, not just when they “may” be hurt. He gathered enough evidence to make it obvious that the children were not “likely” to be hurt, and the prosecutor dismissed the charges.
The “may” term in the California statute is not Constitutional, DeLugas told me, because it takes the decision-making rights from the parent and gives them to the state, permitting the authorities to charge any parent, at any time, under almost any circumstances. For instance, he said, “A parent who permits a child to play tackle football is subject to being charged under this same statute because the child ‘may’ be injured.”
In truth, a child playing football — or hockey, or even Red Rover (my kid broke his arm) — is more likely to get hurt than a kid walking home, even in the dark, on a route he knows.
So we must fight the laws that can criminalize everyday parenting decisions simply because they are unpopular, or could, once in a million times, go wrong. When the law allows us to prosecute parents who trust the odds and trust their kids, said DeLugas, “Every parent should be concerned.”
Okay. I am. – L 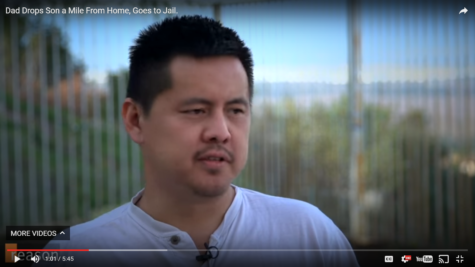 Mike Tang made his son walk home at night. The cop who arrested him said, “I wouldn’t let my 20-YEAR-OLD walk alone.”

A WATER BOTTLE in a CAR? That Is Crazy Dangerous!
Is Your Child’s School Cancelling for Eclipse Reasons?

96 Responses to Mike Tang, Dad Who Made Son Walk Home in Dark, Loses His Appeal