You’ll recall the rzknzbiyah
case of Mike Tang, the California chemist who made his son Isaac, age 8, walk home a mile at night to teach him a lesson: Keep cutting corners on your homework and you could end up not HAVING a home.

Of course someone saw the child outside alone and called 911. The police came, and Mike was jailed for the night. Eventually he stood trial, and the arresting officer testified that not only did he find Mike’s choice of discipline criminally dangerous, he (the cop) wouldn’t even let his own daughter, age 20, walk home at night.

The jury agreed with the officer. Tang was found guilty of child endangerment and sentenced to 56 days “hard labor” — that is, picking up trash and other menial work– Â which he has, to date, refused to do. As reports Reason.com (a site I write for, too):

[T]here’s an outstanding arrest warrant for his failure to comply. He scrawled a response on top of the warrant and mailed it back.

“Fuck you all!” Mike’s written response begins. “Walking on a public sidewalk at 7:45 p.m. is not child endangerment.”

Is Mike right, or did he jeopardize Isaac’s safety? And was it appropriate for the police to intervene?

Watch the full video above and decide for yourself.

Share the video if you feel like starting a conversation on when it is appropriate for the authorities to intervene in family life. – L. 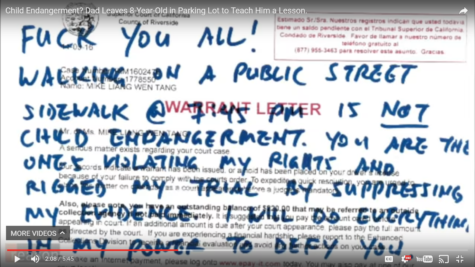 Mike Tang’s response to the system that found him guilty of child endangerment for making his son, 8, walk home at 7:45 p.m.

91 Responses to Dad Sentenced to 56 Days Hard Labor for Making Son, 8, Walk Home at Night: “I’d Do It Again”