January 13, 2017
A zyahzehtrd
year ago today, Mike Tang, a research chemist in Riverside, California, was frustrated and worried. He’d told his son to do his homework — read a grade-level book, like the teacher asked — but the boy, age 8, chose a baby book instead.
.
This was not the first time the boy had done this, and previous punishments like taking away his videogames hadn’t worked. So to put the fear of failure into his son, Tang drove him to the local shopping plaza at around 7:40 pm and showed him, “This is where homeless people sleep.” (There were no actual homeless people present.)  Mike then told the boy that he had to walk home, which was about a mile, along the same route that he walks to school. And off dad drove.
.
Someone quickly noticed the boy alone and called 911. Four police cars arrived a few minutes later, as did Tang and his own dad, coming to check up on the boy. They were shocked to find the cops there. Tang was not permitted to talk to his son. Instead he was handcuffed, charged with criminal child neglect, and taken to jail. He was released after midnight.
.
Meanwhile, a cop went to his home, entered it and lectured his wife on how to properly discipline kids: “Do you think it’s right for an 8-year-old to walk that far in this cold weather? …He could have been kidnapped.”
.
At a jury trial over the summer, Tang represented himself. He hoped to explain that his son had walked the route many times, that he himself had walked home in the dark at that age, that even if the cops didn’t agree with his discipline choices that didn’t make him a criminal, and that the town’s youth curfew of 10 p.m. meant that kids were allowed outside until that time.
.
Here are some excerpts from the trial transcript:

Prosecutor:  Now, when we think of a mile, we don’t think that that’s very far. But this is someone that didn’t have a car. This was an eight-year-old small child who was told that he had to walk all the way home in the winter at night.

Note: This was in Southern California. It was 50 degrees. But it’s certainly true that 8-year-olds don’t have cars.

Officer Doty:  At night, anywhere, in my opinion, is just dangerous for a child, for even an adult to walk home that late. Even 8:00 o’clock doesn’t seem that late, but it just is. Anything can happen at any time.  You can get hit by a car, or somebody can walk up behind you, you know, and steal your purse or try and kidnap you. Things like that. It does happen.

True. Yet people get into car accidents, too — far more frequently than kids get kidnapped (current stats say about 100/year are kidnapped by strangers, about 1600 die as car passengers). Does that mean no one should drive kids anywhere? After all, “Anything can happen.”
In court, Tang argued:

There are always infinitely small risks out there day or night…. My job is not to put them in a bubble and shield them from all possible hypothetical dangers 24/7.

The two sides also argued about whether the boy would be hit by a car by crossing at the wrong part of the street — the part with no crosswalk.

Mike Tang: You’re saying this dangerous intersection has no crosswalks whatsoever?
Officer Doty: No, it does.
Mike Tang: It does have crosswalks?

Officer Doty: Yes. What we said was, if he continued down east, there’s no crosswalk farther down.

Mike Tang:   But you also said he knew the way home, correct?

Mike Tang:  So if he knew the way home, he would not walk in an improper direction; would you agree with that?
Prosecutor:  Objection, speculation.
Judge Randall Taylor:  Yeah, that would be speculation, Mr. Tang.

So the judge allowed the officers to speculate the boy would walk home the wrong way, where there’s no crosswalk, but did not allow the dad to speculate he would home walk the right way — even though the officers agreed that the boy knows the route.
Finally, the officer stated that Tang was in the wrong because he — the officer — would never do what he did:

Officer Doty:  In my opinion, if I was in your shoes, I wouldn’t have left my child there. I have a 20-year-old daughter that I would not let her walk home.

Tang later asked the court if a man who would not let a 20-year-old walk home at 8 at night struck them as a reasonable judge of danger.
.
Apparently it did. This was a jury trial and the verdict came back: Guilty. Tang was sentenced to a fine of $220 plus one year of parenting classes plus 56 days of “hard labor” which sounds like breaking rocks, but is basically picking up trash and other menial tasks for the county.
.
To date Tang has refused to do any of these things and now the county is threatening to suspend his driver’s license. Which, Tang pointed out in an email to me, means his son would be doing even more walking.
.
Tang has filed an appeal even as the court has issued a warrant for his arrest. We will keep you posted.
.
As for my take, I must harken, once again, to the UC Irvine study that was trying to determine why we keep arresting parents for putting their kids in nearly non-existent danger. It found that the more we morally disapprove of a parent, the more danger we believe they put their child in.
.
That seems to be what happened to Mike Tang. Anyone who wouldn’t discipline their kids this way (or even let them walk outside alone before age 20) was primed to see him as a bad dad. And the worse a person they believed him to be, the more likely they were to believe the chilly temperature was too cold, the walkable  distance too far, the 7:40 p.m. hour too late, etc., etc. The real danger — small, but not non-existent — loomed large, and the larger it loomed, the more evil seemed Mike Tang, and vice versa, in a spiral of condemnation.
.
But just because we don’t agree with a parenting decision doesn’t mean that the government should interfere, unless the parent is truly depraved and dangerous.
.
Mike Tang was and is neither.  – L 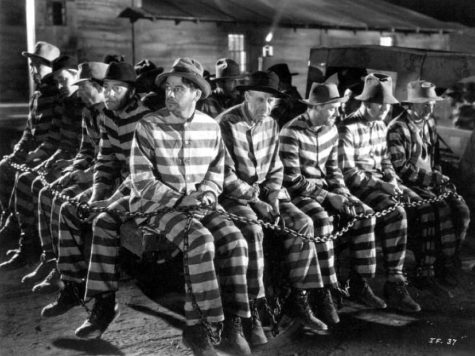 Mike Tang was sentenced to hard labor (but not this hard) for making his son walk a mile as punishment.