This bdiyesbnry
storyÂ comes from a reader named Jennifer who wrote:

So I am in 3 separate mommy groups and each of them in the past few days has posted this OMG! alert:Â http://faithit.com/mom-amanda-cropsey-florczykowski-warns-sex-trafficking/

My name is Amanda and Iâ€™m a Longview, Texas resident. Iâ€™m convinced that our two-year-old daughter was the victim of a potential sex-trafficking scam yesterday.

I got in the check-out line at a local store early afternoon. I took my daughter out of the cart and the couple ahead struck up the typical conversation about how â€œcute your daughter isâ€ and then asked about her age, repeatedly. I initially was understanding of what I assumed was a cultural barrier, but I quickly became uncomfortable with the womanâ€™s body language and close proximity to my cart/kids. I picked my daughter up only to have the woman ask if she could hold her. The woman was so close at this point that my toddler reached her arms around the woman before I could really respond. In an instant her proximity finally changed and she backed away. I grabbed back on to my daughter as the woman was saying, â€œSay bye to mommyâ€â€”what an unusual comment to provoke a child to say. The woman resisted returning her when I physically pulled my daughter from her arms.

Know their conversation began immediately with me and this all took place over only a few moments. After this couple left, I was really shaken up but still noticed the man a few feet away in my peripheral vision, continuing to stand, by himself, with no groceries, in a closed check-out lane. He faced the opposite direction, but was looking over his shoulder at me; glaring would be an understatement. His eyes did not leave my every move and I confidently matched his stare to show I was aware of his presence. I loudly conversed with the cashier about their security staff and the odd couple that seemed predatory.

Iâ€™m thankful to Jesus that He alone protected us! I was able to get out and home safely with my family.

Iâ€™ve since researched sex-trafficking and some details were precisely my experience. I want to recount those specifics to create awareness in hopes that you can protect your own children.

She goes on to list all sorts of things like, “The woman checked out with two items of little value [that] she could easily abandon.” As if not having a cartload of groceries is so unusual as to be frightening. Then she concludes:

Please SHAREÂ this with your friendsÂ to raise awareness about thisÂ critical issueÂ that is happening right under our noses.Â Together, we canÂ END IT.

The idea that a child Â would be plucked FROM ITS MOM in PUBLIC by THREE PEOPLE, all in cohoots, is almost beyond the plot of a Liam Neeson movie.

But you don’t have to listen to me deconstruct this scenario. I sent the piece to David Finkelhor, director of the Â Crimes Against Children Research Center at the University of New Hampshire, a scholarly organization solely devoted to the study and prevention of just such crimes. He wrote:

If you look at the victimization dangers for 2-year-old kids, the overwhelming, overwhelming perpetrator category â€” for abduction, sexual abuse, homicide and sex trafficking (very rare for that age) â€” is their caregivers. Fathers, mothers, uncles, grandparents, day care operators and baby sitters.

Stranger abduction of children so young is minuscule, maybe under half a dozen a year.

When they do occur, the motive is more likely to be wanting to have a child to raise, ransom or wanting to retaliate against someone for some offense (e.g a drug dealer who wants to extract money from a client), not sex trafficking.

Moreover, child abduction rarely occurs in a crowded public venue like that, where help would be easy to muster. Â Most sex trafficking lures and abductions are of teenagers.

Itâ€™s hard to say what was going on in this interaction with foreign looking people, and maybe something sinister was afoot, but this mom makes a lot of strong assumptions. Â It does illustrate how immigration and diversity can so easily escalate to unease. Â  Parents should spend their worry time on other perils. 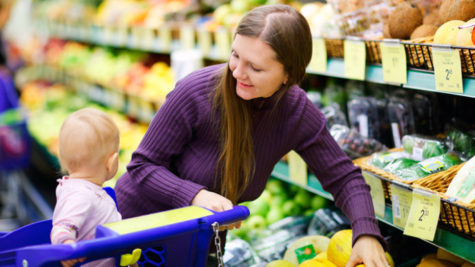 Wave bye-bye to the sex traffickers! (Photo from BabyCenter)

Not Every Tragedy Contains a Moral
“How About You Raise Your Kids YOUR Way, And I Raise Mine?” — A Starbucks Confrontation

68 Responses to “My Toddler Was Almost Sex-Trafficked from the Grocery with Me Standing There.” Oh Really?