HEY! I forgot to add the video I made a few years ago about a cartwheel ban. Enjoy!

Yes, dbfeakzztb
a school in Canada banned cartwheels. What’s worst about this is the school’s reasoning:

Cartwheels have been banned at M.T. Davidson Public School in Callander.

Cartwheels are not permitted on school property in the playground rules section of the school’s draft handbook for 2017-18. The rule came into effect this school year even though injuries have not been reported, principal Todd Gribbon admitted.

â€œThe activity can cause concussions, and neck and wrist injuries,â€ he said.

True — an activity, including a cartwheel, can cause injury. Walking down the stairs can cause falls resulting in concussions, neck and wrist injuries. Walking outside can get you hit by a car. Swimmers can drown. Bakers can catch their hair on fire. Those brave enough to consume solid food can choke. Students sitting still too long can get embolisms.

The precautionary principle — why do something that could cause harm? — seems prudent until you realize it often doesn’t distinguish between a calculated risk and “WHAT IF SOMETHING TERRIBLE HAPPENS???” Recall that just the other day, a New York Times reporter said it was a bad idea for a kid to mow a lawn, even if it’s the White House lawn, because there could be an accident. Really, we are idiots when it comes to risk. We think that there’s risk vs. no risk — so why would any ever choose the former?

Because it’s always risk vs. other risk, world. The risk of walking to school seems too great to many people, who forget there’s a risk in being driven. There’s a risk in doing cartwheels that is offset by the risk of not doing cartwheels. Kids playing, loving the outside, running around, being active, learning balance — all parts of cartwheeling — may heighten their risk of wrist injuries while lowering their risk of obesity, heart disease and school-hating-syndrome. The risk of learning to TAKE a risk decreases the crippling fear OF risks. The crippling fear OF risks (also known as “insurance brain”) leads to faulty risk assessments.

Which leads to no carthwheels. – L 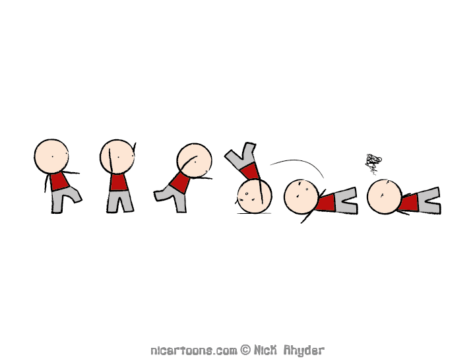