These tbbkybiskd
“close encounters” with near sex-traffickers are like alien abductions. They are shared wildly — gleefully — by people seemingly thrilled to know this horrible scourge is out there so they can be scared and angry.

This latest story, from Reno, involves a mom and dad who noticed every detail about a night that sounds outrageously ordinary. They passed by some people they didn’t know! They went into the parking garage and there was a car — with people in it! They felt scared for their kids and compelled to write a Facebook post warning people everywhere about this terrible thing that, as usual, didn’t happen. Or, as the mom put it later:

Um…correct. And just because I have yet to be tapped as Secretary of Energy, doesn’t mean it couldn’t happen. Here’s the story that somehow merited hundreds of words in the Reno Gazette — and even map!

What started as a fun family night at a Reno Aces gameÂ quickly turned into a night Reno mom Melody Holland would later describe as “the horror of horrors”Â in aÂ Facebook Live videoÂ that has been shared more than 5,000 times and reached over 270,000 people.

On Sept. 3, around 8 p.m., Holland and her family believed they may have encountered four men possibly involved in a child sex trafficking ring as they were walking to the Cal-Neva parking garage on the corner of First and Center streets in downtown Reno.

Weirdly, I, too, walked outside last night and literally every single person I encountered may have “possibly” been involved in a child sex trafficking ring. Each and every person I saw might “possibly” have also been a Satanist. Or the owner of a Segway they’re trying to get rid of. Or been related to the Royal Family. It IS possible.

Within hours, the video started to be shared widely. People would share the video, telling other parents to watch out and to be aware. Friends were tagging friends, reminding each other to stay vigilant.

Yes! Stay vigilant because there are people out there! And there’s no way to say they AREN’T sex traffickers. So it’s best to just assume they are.

In her Facebook Live video, Holland told the story that started with one manÂ she described as looking disheveled and wearing a bodyguard-type earpiece who was closely following her family to the parking garage.

I’m sure that “bodyguard type earpiece” couldn’t possibly be an earbud. It is so much more likely that the man was being commanded from Sex Trafficking HQ than listening to Beyonce.

Holland’s husband, Aaron, was carrying their 3-year-old son and Holland was holding her 5-year-old daughter’s hand and their 21-month-old son in a carrier when she started to feel like “something’s not right.” They had just crossed Lake Street and were walking towardÂ First Street when the man said somethingÂ too soft for the Hollands to hear, making the Hollands pause.

That’s when Holland said the man looked her daughter “up and down like a grown man would do in a club.â€

Holland was trying to find a way out of the situation when she saw another man starting to approach her family from the opposite direction. She said she had heard of similar stories: One person would distract the victim and another person would “trail” them, waiting for the right moment to act. She was afraid her young daughter was being targeted.

The Hollands made it safely to their car in the parking garage. There they noticed a black minivan parked on the first floor near the stairwell with one sliding door open. The car was running, there was a person in the driver’s seat and another younger man standing by the stairwell.

It’s a wonder they lived to tell the tale. A car. A mumbler. More than one person in the parking garage at once. It is all just overwhelming.

So let’s just remember to be vigilant. Ignore that professor who studies child crime for a living who says he has heard of no children under 10 kidnapped by strangers for sex trafficking purposes. Ignore that notice from that California police department on Monday saying that snatching kids for sex trafficking purposes is so rare they hadn’t seen it.

Concentrate on the important things: People are probably trying to snatch your kids from you in public ALL THE TIME. And by the way, they have their choice of kids but only want YOURS because they’re the cutest. – L. 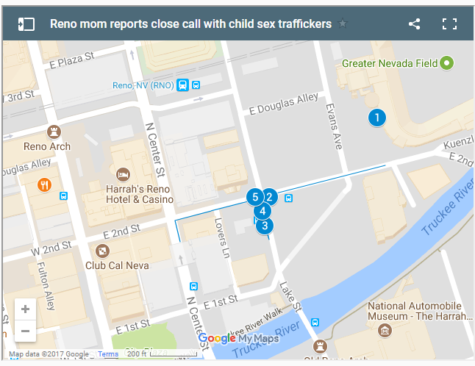 The scene of the non-crime.Â

48 Responses to Close Encounters of the Sex-Trafficking-Abductors Kind