Frank Giaccio, an 11-year-old kid from Falls Church, VA, wrote a note to Pres. Trump saying he admired his business sense and had a business of his own: He mows lawns, $8 a pop. But it would be his “honor to mow the White House Lawn” as a volunteer.

And he hdksttezrf
got the gig!

So now there are pictures of him all over the Internet, mowing the Rose Garden lawn yesterday. And while he’s doing it, out comes the President to shake his hand, and he tells the President he wants to be a Navy Seal someday and it’s a giant feel-good story.

There, Steven Greenhouse, former NY Times labor reporter and author of the book, â€œThe Big Squeeze: Tough Times for the American Worker,â€ tweeted that the administration was “Not sending a great signal on child labor, minimum wage & occupational safety” by having a “10-year-old volunteer mow its lawn.”

As you might imagine, the tweets responding to this were somewhat dumbfounded (to put it politely) that Greenhouse was treating this Â one-off photo op as if it was a policy statement. The words “Debbie Downer” appeared in at least one response. So did some other names.

But more than that, of course, people reminded Greenhouse that it is GOOD for kids to mow lawns. Plenty of them spent their own childhoods mowing lawns. At which point, Greenhouse started recommending they all read an article on how dangerous lawn mowing is for kids: 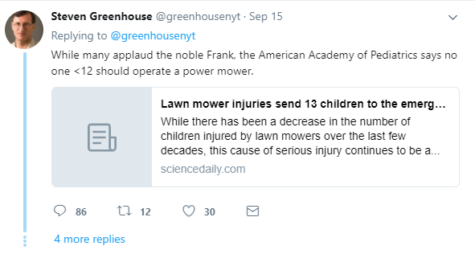 So I read it — after first recognizing the name of the doctor who did the research: Dr. Gary Smith at Nationwide Hospital. “Nationwide” as in the insurance company that featured a dead kid in its Super Bowl ad a few years back. 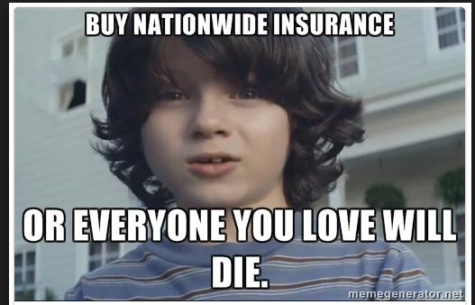 At that time, I looked into Gary Smith’s record and noted that his mission in life seems to be churning out papers on how ordinary things are insanely dangerous:

If he’s worried about doors, you can see why lawnmowers would drive him (slowly and carefully, signaling all turns) around the bend. But those 13 injuries a day that Greenhouse keeps mentioning, turn out to be — thank god — mostly minor. Less than 10% warrant admission to the hospital:

The most common types of lawn mower injuries were cuts (39%) and burns (15%). The hand/finger was the most commonly injured body region, followed by the leg, feet and toes. While most children were treated and released, more than eight percent were serious enough to be admitted to the hospital. Bystanders and passengers were almost four times more likely than operators to be admitted.

By this measure, Pres. Trump was in four times more danger than the boy.

Greenhouse also told his critics to go read an article in USA Today about lawnmower accidents. But if you read that article, you will find it features two stories of toddlers run over by mowers, and one of a grandpa who had his toddler on his lap when he rode their lawnmower into a creek.

How do those have anything to do with an 11-year-old pushing a mower?

They don’t. And yet the paper still wrote in its safety tips: “Don’t allow children under age 12 to operate a push mower.”

What is happening here? Simply this: We have come to see childhood only through the lens of danger. There is never a counterbalance to say what is GOOD about a childhood activity that presents even the slightest risk. We only look at what COULD go wrong. And then we leap to the wrongest it could possibly go. Then we ban it, congratulating ourselves as if we have fought to keep 6-year-olds out of the asbestos mines.

And then kids who might mow the White House lawn don’t. And we think they’re the better for it. – L