There are two ways to approach a risk: Try to spend your whole life avoiding it, or learn how to deal with it. In Germany, when it comes to kids, the authorities seem to be voting for Option B. Here’s a letter from a mom over there:

Dear zkbzbtkbde
Free-Range Kids: Finally took a photo of a poster I wanted to send you: 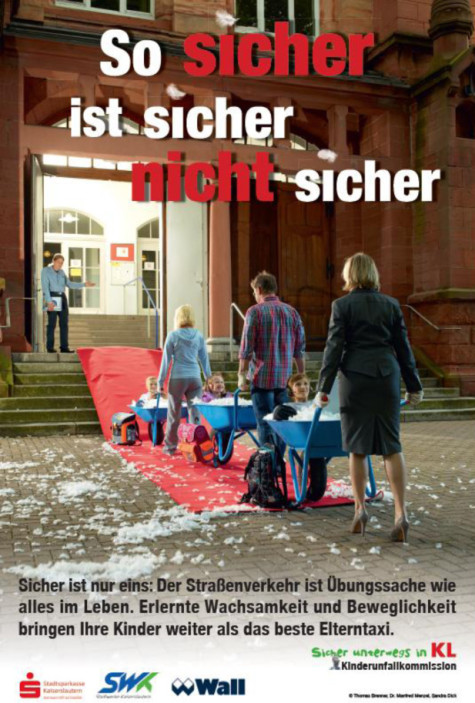 The picture shows parents wheeling their kids to school in a wheelbarrow on a bed of feathers.

The local traffic authorities realized there was an increase in traffic accidents involving kids  caused by their inexperience in being near traffic on sidewalks, having to cross roads on their own, and general lack of knowledge of the road rules. Their research made them realize this was linked to the appearance of the “drop off and pick up” scenario at school/sports/etc.,  instead of the arrive and depart on your own practice of before. They ran this campaign. The wording underneath says, roughly, “There is only one certainty: Traffic awareness requires practice as with everything in life. Learned awareness and movement bring your children further than Mum’s taxi.”

It was sponsored by the Children’s Accident Commission of Kaiserslautern, Germany under the project “Safety while out and about.” They emphasize familiarizing your kids to traffic and what to do in and around traffic and to slowly let them be independent movers on a step by step basis.
.
And I was amazed to find that it is compulsory for all year 3 kids here to undergo bicycle training and assessment through the school — i.e. they have to be able to ride a bicycle, have a helmet, and pass a practical assessment at a traffic center to show they know the rules of the road, how to cycle in traffic and execute it without endangering themselves. Neat huh?
.
Be well,
.
Michelle

It’s like giving kids swimming lessons, or driving lessons — lessons that recognize that adults will not always be orchestrating and supervising every second of their lives. It’s liberating, empowering, and protective all at once. It even saves the environment from a million cars dropping off able-bodied kids every morning.

Could we do this here? Has anyone’s school undertaken something like this? – L.

Parents Investigated for Child Abuse Six Times, Thanks to Fake Calls from Crafty Neighbor
NJ SUPREME COURT RULES THAT LEAVING A KID IN THE CAR IS NOT AUTOMATICALLY ABUSE

93 Responses to Want Safer Kids? Send Them Into Traffic