What a huge victory for common sense, decent parents and a country otherwise gripped by “worst-first thinking” –thinking up the worst case scenario and proceeding as if it’s likely to happen. The New Jersey Supreme Court just ruled that a mom found guilty of child endangerment for lettingÂ her sleeping daughter wait in the car for 5-10 minutes in a suburban mall parking lot on a cool day deserved another hearing.

You’ll recall the case from when I bhkdhsfand
wrote about it in January of 2014, and then again about a year ago, when the mom lost her appeal:

The toddler slept through the whole â€œordeal,â€ but the mom was found guilty of neglect, even upon appeal, when the three appellate judges ruled that they didnâ€™t have to list the â€œparade of horriblesâ€ that COULD have happened to the child.Â Which is, of course, fantasy as policy again: Just because the judges could imagine a kidnapping, or carjacking, or a big bad wolf, doesnâ€™t mean that these are at all likely.

I’m happy to say that the New Jersey Supreme agrees. As newjersey.com reports:

In a unanimous 7-0 decision, New Jersey’s highest court reversed an appeals court ruling last year that found the woman guilty of child endangerment because even though her daughter wasn’t harmed, simply leaving a child alone in a vehicle â€” even briefly â€” was enough to constituteÂ abuse or neglect.

The Supreme CourtÂ ordered that the woman â€”Â identified only by her initials, E.D.-O. â€” deserves a hearing in which all of the case’s circumstances are considered.

“Any allegation of child neglect in which the conduct of the parent or caretaker does not cause actual harm is fact-sensitive and must be resolved on a case-by-case basis,”Â Judge Mary CatherineÂ CuffÂ wrote for the court.

You mean, instead of treating all parents who opt for a bit of convenience as craven child abusers, we can actually consider reality instead of just outrage? Imagine that! On second thought — don’t. Imagination is what got us into the trouble in the first place.

You see, it is very easy to imagine a child dying in a car, because that’s what we’ve been told to do by endless public service announcements and articles about this “danger” to kids.

And while it’s true that some kids do die in cars, it’s also true that more kids die in parking lots. And even MORE kids die in cars that are moving. You know — as passengers. So if we really wanted to save kids, we would arrest any parent evil enough to drive their kids anywhere.

But of course, that’s insane. We can keep the small risk of a fatal car crash in perspective and let parents go about their lives.

Until they park the car. Then we lose all perspective and start thinking like the judges who found the mom guilty of abuse, despite the fact Child Protective Services visited her home and found nothing at all to indicate danger:

But the state Division of Child Protection and Permanency filed a complaint against the woman and her husband, seeking care and supervision of all four of their children.

E.D.-O. appealed and requested an administrative hearing,Â but she was denied on multiple occasions.

A three-judge appellate panel agreedÂ that the woman’s actions constituted gross neglect and thus did not require an administrative hearing.

“A parent invites substantial peril when leaving a child of such tender years alone in a motor vehicle that is out of the parent’s sight, no matter how briefly,” Judge Clarkson Fisher Jr. wrote for the appeals court panel last January.

Fisher cited the risk of “car theft or kidnapping” and the possibility that “on a hot day, the temperature inside a motor vehicle can quickly spike to dangerously high levels, just as it may rapidly and precipitously dip on a cold night.”

And let’s not forget the giant raptors who could peck through the window and take the child Â back to their nest.

So — huge kudos to the mom’s lawyer, Sean Marotta, for making this case:

“We are pleased the court recognized that not all parenting mistakes are child abuse and that the Division must consider the totality of the circumstances on a case-by-case basis,” said [Sean] Marotta, an attorney with Hogan Lovells, who was co-counsel in the case with the Epstein Arlen law firm in Somerset. “We look forward to proving at an administrative hearing that E.D.-O.’s one-time lapse in judgment does not warrant labeling her a child-abuser for life.”

While I don’t believe the mom’s decision WAS a mistake or a lapse in judgement — it was a rational decision by a loving mom, and one that most of our own loving moms made — I do love the larger point Marotta is making: ANY one-off “mistake” should not be the basis for taking our kids away. Not if we forget to do something, not if our kids somehow slip away from us, not if we do something sub-optimal for reasons of confusion, convenience, desperation or rank stupidity. Kids do not need perfection, which is a good thing, since there is no such thing as a perfect parent. 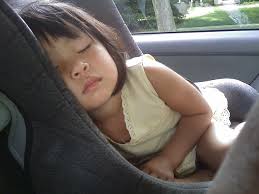 Rest easy! Mom is not going to be stuck on the Child Abuse Registry for letting you wait a few minutes in the car!Â

Want Safer Kids? Send Them Into Traffic
My Neighbors’ Kids are TOO Free-Range