When you really believe the world is full of predators snatching kids right and left, it can drive you crazy. And apparently, it did. CNN fdsrihtrft
is reporting that:

A 6-year-old boy in Missouri endured an emotional four-hour staged kidnapping because his family thought he was being too nice to people he didn’t know, police said Thursday.

The four people involved in the alleged plot — the boy’s mother, grandmother, aunt and a co-worker of the aunt — have been charged with kidnapping and other felonies, the Lincoln County Sheriff’s Office said.

“Family members told investigators their primary intent was to educate the victim and felt they did nothing wrong,” the press release said.

During his reported ordeal the boy was lured Monday into a pickup after getting off his school bus, tied up, threatened with a gun, taken to a basement where his pants were removed, and told he could be sold into sex slavery, police said.

The rest of the sickening story is here. But while we’re discussing the issue of kidnapping kids, let’s remember that even Ernie Allen, the recent head of the National Center for Missing and Exploited Children, told me (when I interviewed him for my book), “Our message is exactly the one you’re trying to convey. We have been trying to debunk the myth of stranger danger.”

His is the organization that put the pictures of the missing kids on the milk cartons (engendering hysteria, but why quibble now?). So if HE says “stranger danger” is an idea whose time has GONE, maybe it’s time for all parents to heed.

And on a strange side note, last week on my show World’s Worst Mom, a mom I was trying to help had had this same idea, except as a business: She would hire a man with a van to “kidnap” kids off the street, to scare the pants off them. (Perhaps literally, like the parents above.)

Maybe that’s not such a great idea, I tried to tell her. And I guess it’s not even that original. (BTW: The schedule for my show is changing, so you can find out when it’s airing here.) I guess if I get a second season, I may be heading to Missouri. – L. 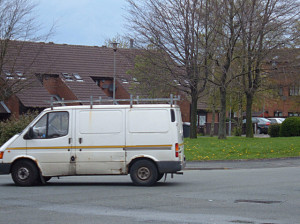 “No Touching the Girls, Even on their Helmets”
App Alerts Parents if Their Kid Skips a College Class

84 Responses to 6 year old’s Relatives Kidnap, Blindfold and Tie Him Up to “Teach Him” About Stranger-Danger (They Remove His Pants, Too)