You’re only young once, but our culture seems determined to make sure that childhood lasts into middle age, if not senility. To wit: There’s a new app, Class120, that pings parents when their kids don’t show up for their college classes. NBC reports:

Class120 ehdndyzati
works with the help of GPS or WiFi. The campus is mapped out and the student enters his or her class calendar information. If the student doesn’t show up at the location where the class is being held, a near-real-time message is sent to the parent, something along the lines of “Hi Joseph Montgomery, Class120 was unable to detect Amy Montgomery at the following class today: Biology101.” School administrators can also be notified.

[CEO of Core Principle, the company that developed the app, Jeff] Whorley projects that by next fall, Class120 will have about 5,000 users across the country. Lynn University is aiming to be the first school to implement the app-based attendance monitoring program campus-wide.

Combine that with the app that lets students file the equivalent of a flight plan before they walk across campus Â (and alerts the police if they don’t get where they’re going) and it’s as if we truly believe young people cannot be safe or responsible without constant electronic supervision.

Or, maybe worse: Young people believe that themselves.

The Class120 creators claim it is not intrusive, in that no one HAS to sign up for it…yet. And it also only registers whether or not students show up for class — not where or how they spend the rest of their time…yet. But the double dystopian ideas behind it are that:

1 – People of college age are still too immature to internalize self-discipline.

2 – Parents must continue to helicopter their kids, even from afar.

You know: Some days it really feels like the country is going Free-Range — for instance, when everyone agrees that the Maryland couple’s children SHOULD be allowed to walk home from the park on their own. But with technology making it ever easier to keep electronic tabs on almost everything a child does, even into adulthood, I do wonder. – L 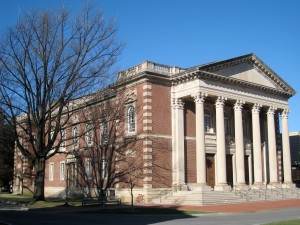 Son, you are two minutes late to your sociology class on the Surveillance Society!

6 year old’s Relatives Kidnap, Blindfold and Tie Him Up to “Teach Him” About Stranger-Danger (They Remove His Pants, Too)
The Free-Range Kids & Parents Bill of Rights