As babies generally are, despite the modern-day delusion that the instant a parent leaves a child in the car, the child expires. The fact that children are more likely to die in parking lots than waiting in parked carsÂ matters not one whit. Why let facts stand in the way of foaming at the mouth? Americans are convinced that kids in cars are in danger (ignoring the weird fact they themselves spent part of their childhood waiting in the car) and they are GLEEFUL that they finally have a cause in life: Â Haranguing harried parents and threatening to call the police.

Oddly, no one yells at parents who choose to DRIVE their kids anywhere, even though that is the #1 way kids die. They die in MOVING cars.Â (“Lady! You drove your child to the mall! What kind of crazy mom does that? That’s NUTS!”) Maybe such a day is coming. But so far we are only rabid when it comes to kids in NON-moving vehicles.

Anyway, the 44-second video below shows the mom exasperatedly responding, “If you guys go and have your children, you can take care of them the best you can. I am going to take care of him the best that I can.” Naturally, the whole thing has gone viral — Yay! A mom the country can hate on! — withÂ KHQ eagerly reporting nuggets of wisdom from its comments section, including, “Obviously we need to look into a heavier law for leaving children in the car. I’m sorry but if they are under the age of 16 they shouldn’t be left in a car, especially a baby.”

Yes, that is certainly a well-thought-out response that merits air time.Â So’s the next: “Many of our parents left us in the car when they went in to grab something at the store and we survived. In this day and age is it a poor choice? Yes.” 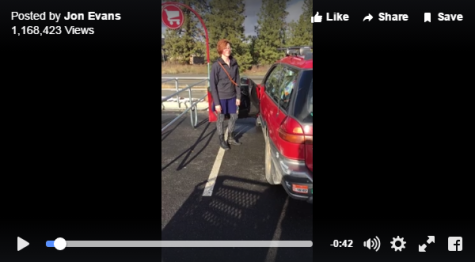 She left her baby in the car a few minutes? No child has EVER SURVIVED that, have they?Â