I am in Boston giving some talks, and once again, some parents tell me that one reason they’re not sending their kids outside is the fear that some busybody will call 911. That is why we must make it not only normal, but blazingly, officially LEGAL to give our kids some independence, a point the Texas Policy Institute’s Brandon Logan and I make in this piece of ours that appeared in the Austin-American Statesman.

Commentary: Giving kids an old-fashioned childhood is not abuse

By Brandon Logan and Lenore Skenazy – Special to the American-Statesman

A few years back, children’s book author Kari Anne Roy was visited by both the Austin police and Child Protective Services for allowing her son Isaac, then 6, to do the unthinkable: play outside, up her street, unsupervised.

Though eventually the charges were dropped, it wasn’t before Child Protective Services interviewed all three of Roy’s children. Afterward, Roy’s daughter, age 8, told her mom that the interviewer had asked if her parents ever showed her movies with naked people in them. “So, my daughter, who didn’t know that things like that exist, does now,” Roy later said. “Thank you, CPS.”

But it was Roy’s final exchange with the caseworker that should chill any Texan’s heart. “What do I do now?” Roy asked, regarding her kids. Simple, replied the investigator, “You just don’t let them play outside.”

In Texas, we like to believe we are free to raise our children as we see fit. But we worry that parents today can’t allow their children the independence to flourish without running afoul of the state’s child neglect laws.

Currently, Texas parents can be investigated for improper supervision if they put a child in any situation authorities believe “could have resulted in substantial harm.” This hopelessly broad and speculative standard allows state authorities to turn ordinary and safe parental decisions into a panoply of potential disaster.

The issue is this: While there has never been a safer time to be a child in America, there’s no such thing as a zero-risk activity. So, the fact that letting your kid walk to school could result in substantial harm — no matter how unlikely — means that the state can pretty much investigate any parent anytime they let their kids do anything other than settle into the La-Z-Boy to play “World of Warcraft.”

As parents, we believe it is our job to let our kids take a few, simple risks. Not nutty ones, like base jumping into a pit of rattlesnakes, but things like learning to use a pocket knife or ride a skateboard.

Are many Texans really getting investigated for letting their kids play outside? That’s hard to say. But in the last 20 years, CPS investigations for all forms of abuse and neglect have remained flat — or even declined — while investigations for neglectful supervision have tripled, based on a Texas Public Policy Foundation analysis of CPS data. In fact, investigating parents and removing children for “neglectful supervision” is now 70 percent of what CPS does. As recently as 1996, it was less than 40 percent.

If authorities are removing children from parents who run meth houses, great. But if they’re removing them from people like Kari Anne Roy, we’ve got a problem.

Read the rest here. And consider trying to get your state or town to pass the Free-Range Kids Bill of Rights. Give kids back the right to play outside! – L 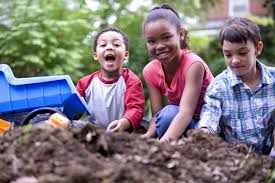 This should never be considered a crime!